If there was any pride left in me at being borne a human instead of a cockroach, it's now purged. (I say a roach and not a spider. Why? Read here)

Has all of Europe learnt the right lessons from the war?

Switzerland voters recently approved a constitutional ban on the construction of minarets on Muslim places of worship.

So technically, the Swiss can't have The Taj Mahal!

"...We Swiss sacrificed our good standing as a multicultural and open-minded society to ban the construction of minarets that no one intends to build in order to defend ourselves against an Islam that has never existed in Switzerland..."

Instead of Jaundiced eye, we should now say Swiss eye! 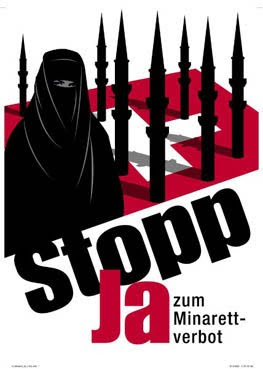 Although to our eternal shame, we Indians brought down the Babri Mosque in 1992, I am happy to note that no rabid Hindu fundamentalist has asked for something as crazy as a ban on the construction of minarets.

A lot of things are, these days, said and done to minorities, in the name of Shivaji, who was one of the most tolerant and cultured ruler the world has known. The capital of his kingdom was Fort Raigad and the temple of Jagdishwar is located there.

D G Godse writes: "Builders of Jagdishwar temple on Raigad did not feel shy of employing Islamic architecture in its construction..." ('shakti soushthav', 1972) 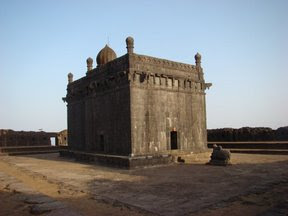 The Taj (completed c1653) and Jagdishwar temple were built around the same time. In a letter to D G Godse, I asked him: "When Shivaji visited Agra in 1666, he most likely saw The Taj. If he did, what did he likely think of it?".

Godse felt The Taj and Raigad were very beautiful in their own way. A sensitive person like Shivaji would have appreciated the beauty of both.

For me, mosques and minarets were never eyesores. On the other hand, perhaps like Samarth Ramdas (समर्थ रामदास), I have found "domes, mosques pleasing" (घुमट मशिदी मनोहर).

My native Miraj had plenty of them.

In winter, at dawn, I liked azan (the Islamic call to prayer) as much as early morning devotional singing (काकड आरती) that was done in the nearby Vithoba temple or Bhakti-sangeet that my mother tuned into or the sound of train whistle that proved the Doppler effect.

Much before I saw the Taj, as a 13-year old when I saw Gol Gumbaz of Bijapur, I was awestruck. 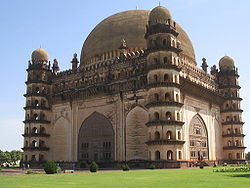 Gol Gumbaz, Bijapur
Posted by Aniruddha G. Kulkarni at 9:00 AM