The Fall of the Wall:Camus, with help from Kafka and Molière

I don't remember what I was doing when I first heard the fall of the Berlin wall in 1989. I was familiar with the wall largely because of reading of John le Carré's classic "The Spy Who Came in from the Cold"(1963).

Some people say 'the fall' restored the light in Eastern Europe.

I always felt Václav Havel was a poster boy for anti-communist brigade.

Therefore, I was surprised to read him saying:

"...It lies in human nature that where you experience your first laughs, you also remember the age kindly. Older people experienced their first joys in that time, and it shapes their remembrance today. There are objective grounds for this nostalgia because the communists cared for the individual from birth to death, something that has gone missing today..." (Newsweek, October 9, 2009)

"...In Eastern Europe, the people wanted communism's fairness but also capitalism's riches. The incongruity of those desires eventually eroded communist regimes but has since produced ironies worthy of Tolstoy. Freedom did not bring justice...

...When light was restored, East Europeans emerged not as heroes but as flawed human beings. They are indeed just like everyone else.

As Poland's Cardinal Stefan Wyszynski once warned, one gang of robbers replaced another.

"Free elections," Constantine Pleshakov concludes, "do not necessarily lead to more freedom. . . . The free market can impoverish a nation as effectively as central planning." How true.

Today, the Czech Republic is a leading producer of pornography, while Sofia and Gdansk market themselves as destinations for stag weekends. Half a million Poles live in Britain, causing the British jokingly (and not so jokingly) to complain that they should take their work ethic and go home. That's not quite the simple beauty that starry-eyed romantics in the West envisioned in 1989..." (November 1, 2009)

Did Rambo Ronald Reagan's speech on June 12, 1987:"Mr. Gorbachev, open this gate! Mr. Gorbachev, tear down this wall!" bring down the wall?

"...The real story, minus the comic book hero, is more complicated -- and interesting. Reagan still plays a role, but as diplomat, not Rambo. His contribution came in accommodation; his willingness to talk to Gorbachev gave the Soviet leader the confidence to break molds. Gorbachev, furthermore, did not tear down the wall; he merely suggested that change would be tolerated.

The events themselves were played out by a cast of thousands in Budapest, Berlin, Prague, Warsaw and Bucharest. There was no script; this was an improvisational drama conceived by Camus, with help from Kafka and Molière. The Soviet Union came to the realization that its empire was no longer affordable. Like other imperial powers, it cut and ran, leaving colonial subjects to sort things out for themselves. Chaos naturally resulted.

...Events were shaped by "the logic of human messiness." The regimes in Eastern Europe were destroyed not by monolithic force, but by myriad human beings reacting impulsively to the freedom of possibility. Watching from afar, we saw what seemed like neat little dominoes falling. In fact, what happened was as capricious, and messy, as a tornado. 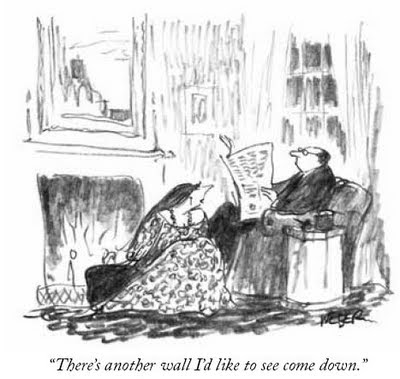