I live in Pune and I am more scared by media than the flu. I sure look like a guy in the picture below saying: "but...but...I didn't know the flu caused permanent impotence..."

"Two welcome developments over the last couple of days have come as some relief to a beleaguered nation beset with anxiety about swine flu. First, the government of India announced a scale-up of the response to swine flu and spelt out a series of strategic steps it intends to take in concert with the state governments. Second, at least some sections of the media have scaled down the level of alarmist reporting and have sought to douse the prevailing panic among the public...." (CNN-IBN is trying to belong to this section.)

"The Supreme Court on Tuesday stayed the Bombay High Court order directing the Chief Secretary, Maharashtra government to submit in sealed cover the report of Pradhan Committee which probed `26/11 terror attacks’ in Mumbai...

...the CJI wondered “what is the use of giving details when the High Court itself says give the report in a sealed cover. What is the advantage? Can the court prevent it {terrorist act}? Why should all such information be provided to the court, is it to have discussions in television channels.”

Mr. Salve said, “we all know about the impending danger and the threat perception. But these secret issues can’t be disclosed to the court.” He recalled the live telecast in the news channels of the 26/11 security operations which was reportedly used to guide the terrorists.

It would result in insecurity and create panic among the public."

I don’t know much about And-That's-The-Way-It-Is Walter Cronkite but Americans seem to miss him badly.

I don’t know if we ever had his counterpart in India: a deeply trusted figure on radio or television.

Print media in India, in the past, had a few Walter Cronkites. But now...

When Ramachandra Guha recently argued in his address “Ten reasons why India will not and should not become a superpower” at the Aspen Institute in New Delhi, one of the reasons he gave was "supine media". (FT, July 15 2009)

"IT takes a good two hours in the morning going through a stack of Pakistani newspapers. It takes about half an hour to go through the leading English dailies that you get in Delhi...

...You read them and you get to know more than you probably would want to about happenings in the film or fashion industry. But if you want to know a bit about events in the rest of the world you would have to seek some other fountain of knowledge.

You can’t blame television for being chatty and entertainment-driven because that’s how television sells. But you would expect newspapers to be slightly different. No such luck with Indian papers which, driven by the great forces of the market, have been dumbed down to the point where they are indistinguishable from any other consumer product...

...There’s no point in singling any newspaper out. By and large, they all look like tabloids out of Bollywood, devoted primarily not to anything as gross or insulting as national or international issues but to some form of entertainment...

...Sounds morbid, doesn’t it? Yet comparing it to the Bollywoodization of the Indian media, the conscious pursuit of blandness and mindless entertainment even by such standard-bearers of the Indian press as the Times of India and the Hindustan Times, you wonder which is the more insidious, such over-the-top passion as to be found in Pakistan or the complete loss of passion, at least as mirrored in the press, you see in India?..." 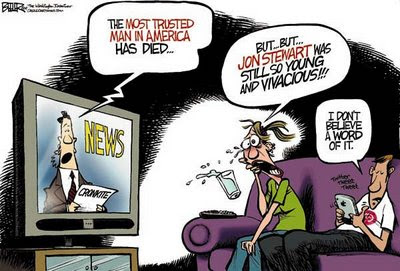 For more pictures of Nate Beeler, go here.
Posted by Aniruddha G. Kulkarni at 9:00 AM