Where is India's Naji al-Ali?

["...Words are only wind from the mouth; they have neither blood nor flesh, but if a messiah's sacrifice keeps banging against mind then his words turn into immortal constellations, in his words we hear consenting-grunts of the universe..."]

I am greatly fond of many Indian cartoonists.

I feel Vasant Sarwate is one of the greatest creative talent to come out of Maharashtra in 20th century.

But we in India surely never had any one like visionary Palestinian cartoonist Naji al-Ali.

I saw his cartoons on July 11 2009 for the first time in my life. And it was like watching Pablo Picasso's Guernica.

Michel Faber has reviewed a book on al-Ali-"A Child in Palestine : The Cartoons of Naji al-Ali"- for Guardian July 11, 2009. Faber says about this picture: "...the pen stands upright, its nib doubling as a candle flame. It's a potently simple image, yet complex: the dripping wax suggests sorrowful tears; the pen's upright balance is perilously unsupported, like the Palestinian state itself; yet the backdrop of night sky, with its foully obscured moon, seems to reference the Amnesty International catchphrase about it being better to light a candle than curse the darkness..."

A child in the picture is figure of Hanthala/ Handala, the barefoot child who silently watches all the evils perpetrated in the Middle East.

What do we call a child who silently watches all the evils perpetrated in India? Has she been conceived yet? Will she look like Balkrishna from picture here?

"...Hanthala became phenomenally popular in the Arab world, spawning a Garfield-like industry of coffee mugs, T-shirts, keyrings, and so on. But instead of a spoilt fat cat, here was a ragged witness to atrocity and political betrayal."

I have put together a collage of al-Ali's caption-less pictures sourced from here. I didn't understand a few of them because they carry Arabic script in the captions. 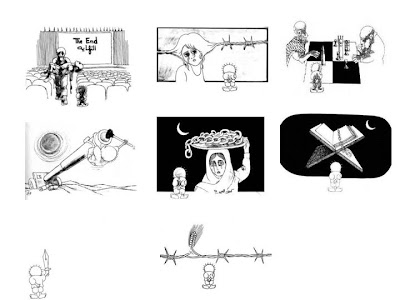 (click on the picture above to get a larger view)

Each of them is a gem. As Faber puts it: "awesomely sad and tender images"

What if Hanthala turned around and locked eyes with us? The thought is scary. I am not ready for it.

Why was Naji al-Ali (and Hanthala) killed?

"...Reportedly, he'd recently been warned by the PLO to "correct" his attitude to Yasser Arafat - a warning to which he responded by lampooning Arafat once more..."

A variation by me on G A Kulkarni's words quoted at the top:


("...Pictures are only wind from the hand; they have neither blood nor flesh, but if an artist's sacrifice keeps banging against mind then his pictures turn into immortal constellations, in his pictures we hear rumbles of the universe...")
Posted by Aniruddha G. Kulkarni at 9:00 AM