What did Mamata Banerjee Burn Down?

Humour always was an integral part of Indian elections.

Even when the Congress party was sweeping election after election in Southern Maharashtra, as a school/college boy, I was entertained by graffitis, songs, handbills, posters and slogans.

Cow-dung (more of buffalo actually) was thrown at the rival's posters and graffitis. It was considered the ultimate humiliation , next only to the loss in election.

Jan Sangh candidate usually lost his deposit and his posters/graffitis collected a lot of dung in every election but the party showed more tenacity than what it shows today. Its leaders were incorruptible. They reached every middle-class home (In Pune, I haven't met a single BJP candidate of my constituency in last 10 years). Even Congress leaders in power that included giants like Vasantdada Patil वसंतदादा पाटील were very accessible to ordinary people. There was a good fight on display.

When Bapusaheb Jamdar (of Congress?) lost an election, people shouted: "पैसा पसरला, बापू घसरला." ("Money was spread but Bapu slipped over it.")

Of late in Pune, there have been almost no posters, no songs, no graffitis during elections.

Therefore, I was thrilled to see following graffiti.

In the picture, instead of a factory, I see oversized egos of Prakash Karat, stock-market-bhad-me-jay A.B. Bardhan, D Raja and other sundry communists like Mohammed Salim. 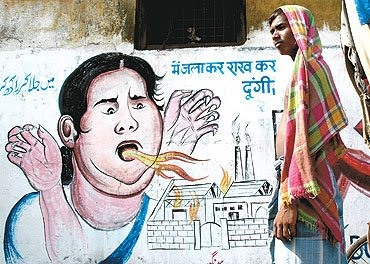 Picture Courtesy: Sandipan Chatterjee, Outlook, May 18 2009
Posted by Aniruddha G. Kulkarni at 9:00 AM

I don't support ur point of view.Coz u seem 2 be a leftist... Mamta s not at all against the "industrialization".Even it is ur CPM who has been destroying everything for the last 31 years.And nothing has left here.TATA and all dat was their own source of income. Do u know the present industrial situation of West Bengal?? Why don't u research on dos locked out factories and d workers who r living a miserable life??Then draw a cartoon. might be Mamta is not responsible 4 dos...

Did you understand what I meant?

I said Ms. Banerjee burnt down egos of communists and NOT factories.

I am a supporter of neither.