(There are a number of entries on this blog on Shivaji, Panipat 1761, T S Shejwalkar. Nanasaheb Peshwe. You can search it to reach them.)

If I were India’s navy chief, November 26, 2008 would be one of the saddest days in my life. Only on November 20, 2008, “Indian warship sinks Somali pirate vessel in the Gulf of Aden” was FT’s most ready story. Indian navy was darling of the international and local media.

Sea is a great leveler.

My first thought after hearing about the Mumbai attacks on the morning of 27th November: India’s vulnerability from the sea-borne invaders has changed little since medieval times

Robert D. Kaplan has put it well: “…the tragedy has caused the world to focus on India’s weaknesses — its lax security, its vulnerability to age-old maritime infiltration and, most of all, the constant threat of caste and tribal violence — that have been obscured by its economic success…” (NYT December 8, 2008)

Since the dawn of 17th century, Shivaji शिवाजी was perhaps the only Indian ruler who understood the importance of an effective navy. But Peshwas- his successors- were not that wise

T S Shejwalkar त्र्यंबक शंकर शेजवलकर and his classic “Panipat 1761 पानिपत 1761” will continue to remain relevant –even prophetic- as long as volatile situation prevails in South Asia. After analysing contemporary actors of 18th century India and Afghanistan, he has blamed Mahatma Gandhi- for whom he had enormous respect- and J L Nehru for not learning from Panipat.

Shejwalkar has pilloried Nanasaheb Peshwe- who also was a principal actor in 1761- for destroying the Maratha navy created by Shivaji. Read scanned image- given below- of a passage from Shejwalkar’s essay: “Nanasaheb Peshwe नानासाहेब पेशवे” (1925).

Has modern Indian state learnt enough from Shivaji (1630-1680) when it comes to self-defense? Or is Shivaji there only to be abused for waging wars against fellow Indians? 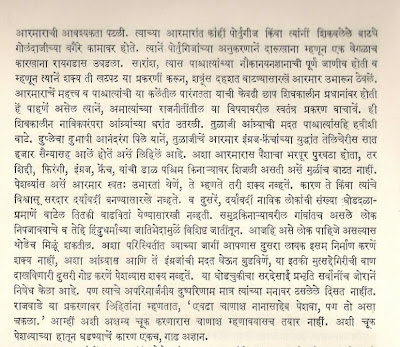