After George W. Bush, what will I be Hawkish about?

If Mr. Obama becomes the president of the US, the feat will be even greater than Ms. Mayawati-a Dalit woman- becoming the chief minister of the biggest state in India.

However, I don’t think much will change for the rest of the world as far as America is concerned because what Paul Krugman says in following quote is not going away in a hurry.

“… I was born in 1953. Like the rest of my generation, I took the America I grew up in for granted – in fact, like many in my generation I railed against the very real injustices of our society, marched against the bombing of Cambodia, went door to door for liberal candidates. It’s only in retrospect that the political and economic environment of my youth stands revealed as a paradise lost, an exceptional episode in our nation’s history…”

Not just that the excitement and expectations are so high with Obama, the disappointment is likely to be even higher.

It was the worst administration that ruled India. I felt crest fallen by 1980.

FOUAD AJAMI said in The Wall Street Journal on October 30, 2008:
“…the tragedy of Arab political culture has been the unending expectation of the crowd -- the street, we call it -- in the redeemer who will put an end to the decline, who will restore faded splendor and greatness. When I came into my own, in the late 1950s and '60s, those hopes were invested in the Egyptian Gamal Abdul Nasser. He faltered, and broke the hearts of generations of Arabs. But the faith in the Awaited One lives on, and it would forever circle the Arab world looking for the next redeemer.

America is a different land, for me exceptional in all the ways that matter. In recent days, those vast Obama crowds, though, have recalled for me the politics of charisma that wrecked Arab and Muslim societies. A leader does not have to say much, or be much. The crowd is left to its most powerful possession -- its imagination…

…The morning after the election, the disappointment will begin to settle upon the Obama crowd. Defeat -- by now unthinkable to the devotees -- will bring heartbreak. Victory will steadily deliver the sobering verdict that our troubles won't be solved by a leader's magic.”

(By the way I am surprised to read the verbal attacks on Fouad Ajami by the likes of Brad DeLong and James Fallows for saying this.)

Personally speaking I will miss George W. Bush's tremendous sense of humour. Every time I see him on a TV screen, I start smiling in anticipation. Indian government will miss him too.

He may have been a kind of mafioso. But he was like one of those 'bad men' who are portrayed very kindly in Hindi films. For me, one of the most moving images of 2008 is his embrace of Indian Prime Minister when they met last at the White House. I thought both had a hint of tears in their eyes.

But above all, once Bush is gone, I won’t know for a while what to be hawkish about! 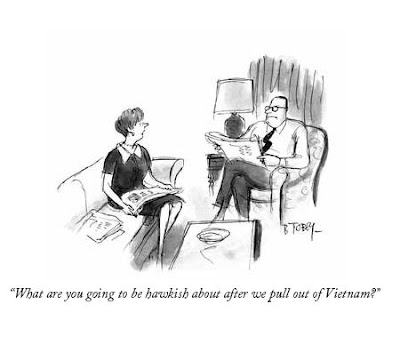