Reader’s Digest for the Overclass,The Economist, does it again!

Paul Krugman: “Nine years ago The Economist ran a big story on oil, which was then selling for $10 a barrel. The magazine warned that this might not last. Instead, it suggested, oil might well fall to $5 a barrel.

In any case, The Economist asserted, the world faced “the prospect of cheap, plentiful oil for the foreseeable future…” (NYT, April 21, 2008)

The Economist October 6th 2007: “The American presidency is Hillary Clinton’s to lose…Mrs Clinton is clearly a formidable candidate for the presidency. She has the most powerful name in the business now that the Bush brand is tarnished. She has a smoothly working political machine. She has a wealth of experience in both the legislative and the executive branch. And she exudes competence. All told, she looks likely to translate this into both the Democratic nomination and a victory in November 2008…”

When Indian stock markets started falling in calendar 2008, the magazine probably thought they finally got one prediction right.

“…India shows dangerous signs of irrational exuberance. It was swept by euphoria last month as the Sensex, India's benchmarket index, hit 20,000 for the first time. India's Economic Times declared, “The first 10,000 took over 20 years. The next came in just 20 months...Superpower 2020?” Instead, India's poor risk-rating should ring alarm bells.

…The p/e for Chinese shares that foreigners can buy is a more modest 22, well below the 40 reached in 2000. In contrast, Indian shares, also with a p/e of 22, have never been so overvalued…

… The riskiest economies, all with current-account deficits and relatively high consumer-price inflation, are India, Turkey and Hungary…”

But as the luck would have it, sure Indian stocks have plunged since then but Chinese stocks have suffered worse, both in local currency and dollar terms! See the table below. 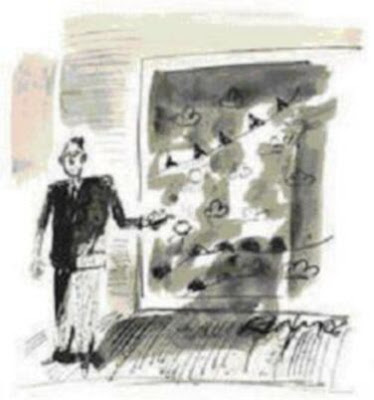 'Now the weather, and as usual it's a tale told by an idiot, full of sound and fury, signifying nothing.'

My caption:’Now the future according to The Economist, and as usual it’s a tale told by an …’
Posted by Aniruddha G. Kulkarni at 10:00 AM