Memory Maybe the New Sex for Americans. For Indians, it's Money.

I had a lot of correspondence with the late M V Dhond म वा धोंड but I never met him. Earlier in my life, the same thing happened with D G Godse द ग गोडसे.

I mentioned this to Vasant Sarwate वसंत सरवटे at my place in Pune. He said I didn’t miss much because if I had met Dhond in 2007, I would have found him almost complete deaf.

No article on Dhond after his death mentioned this. I wonder why.

Aging is cruel. It takes away things one by one.

“They say the 21st century is going to be the Asian Century, but, of course, it’s going to be the Bad Memory Century. Already, you go to dinner parties and the middle-aged high achievers talk more about how bad their memories are than about real estate…”

Mr. Brooks, although loss of hearing and memory now have reached epidemic proportion in graying India, we middle-class Maharashtrians talk about these 10 things in our parties. We don't even mention bad memory. For some of us, good memory is a curse. We don't wish to remember or meet someone who will help us remember "hard times".

“…In the era of an aging population, memory is the new sex. ..

…The dawning of the Bad Memory Century will have vast consequences for the social fabric and the international balance of power. International relations experts will notice that great powers can be defined by their national forgetting styles. Americans forget their sins. Russians forget their weaknesses. The French forget that they’ve forgotten God. And, in the Middle East, they forget everything but their resentments...

…Meanwhile, mnemonic gurus will emerge offering to sell neural Viagra, but the only old memories the pills really bring back will involve trigonometry.

As in most great historical transformations, the members of the highly educated upper-middle class will express their suffering most loudly. It is especially painful when narcissists suffer memory loss because they are losing parts of the person they love most. First they lose the subjects they’ve only been pretending to understand — chaos theory, monetary policy, Don Delillo — and pretty soon their conversation is reduced to the core stories of self-heroism.

Their affection for themselves will endure through this Bad Memory Century, but their failure to retrieve will produce one of the epoch’s most notable features: shorter memoirs” 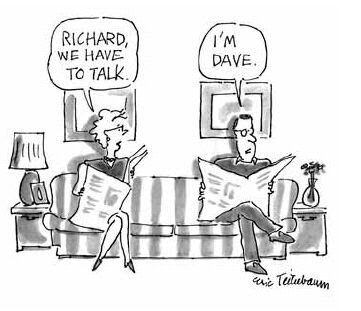