“For years, the ideology of free markets bestrode the world, bending politics as well as economics to its core assumption: market forces produce the best solution to any problem.

But these days, even Bill Gates says capitalism's work is "unsatisfactory" for one-third of humanity, and not even Hillary Clinton supports Bill Clinton's 1990s trade pacts.

Another sign that times are changing is "Predictably Irrational," a book that both exemplifies and explains this shift in the cultural winds. Here, Dan Ariely, an economist at M.I.T., tells us that "life with fewer market norms and more social norms would be more satisfying, creative, fulfilling and fun…"

“Remember Friday March 14 2008: it was the day the dream of global free- market capitalism died. For three decades we have moved towards market-driven financial systems. By its decision to rescue Bear Stearns, the Federal Reserve, the institution responsible for monetary policy in the US, chief protagonist of free-market capitalism, declared this era over…

… If the US itself has passed the high water mark of financial deregulation, this will have wide global implications. Until recently, it was possible to tell the Chinese, the Indians or those who suffered significant financial crises in the past two decades that there existed a financial system both free and robust. That is the case no longer. It will be hard, indeed, to persuade such countries that the market failures revealed in the US and other high-income countries are not a dire warning. If the US, with its vast experience and resources, was unable to avoid these traps, why, they will ask, should we expect to do better?…” 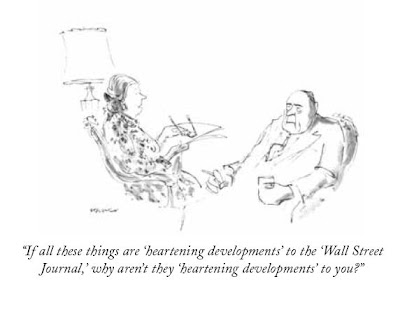