In middle-class India, environmentalism has become as fashionable as it is in the West. It is in schoolbooks, on TV, in after-dinner discussions.

I hope those Indians who could not stand what Michael Crichton said in his book “State of Fear” 2004, will read JOHN TIERNEY in NYT March 25, 2008:

“…Installing a solar-powered hot-water heater or a windmill at your place in the country is not going to erase the carbon footprint of maintaining and traveling to a second home. Recycling glass bottles and avoiding plastic bags at the grocery store will not offset your car’s emissions.

Switching to a Prius will not undo the effects of frequent air travel. A couple of international trips can be worse for your carbon footprint than driving a Hummer for a year. If the delegates to future conferences on climate change are expected to wear illuminated symbols of their energy consumption, they won’t be visiting any more spots like Bali…”

This comes on top of what Jared Diamond said in NYT on January 2, 2008:

“…The average rates at which people consume resources like oil and metals, and produce wastes like plastics and greenhouse gases, are about 32 times higher in North America, Western Europe, Japan and Australia than they are in the developing world…

Other aspects of our consumption are wasteful, too…The world has serious consumption problems, but we can solve them if we choose to do so.”

“Consumption Factor” related problems are not just between nations but also within an individual country.

“Despite rapid economic growth, more than 75% of Indians are poor and vulnerable with a level of consumption not more than twice the official poverty line…

There is evidence to suggest that inequality is widening between the common people and the better-off sections of society.”

With great effort and luck, if you swim to an island, unlike in the past, a windmill and not a tree is likely to greet you! 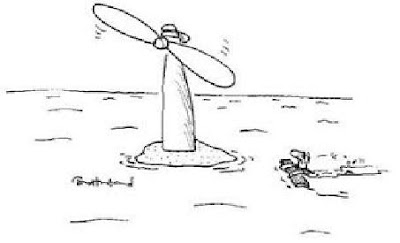 The Spectator
Posted by Aniruddha G. Kulkarni at 1:30 PM

I am from Canada and we canadians and americans would have to have our souls recycled before we can solve an energy problem. Is it necessary to own three pretentious vehicles?

I look to do art and there is some energy waste irony in that also. Some reputable artists work with recycled materials but a small box of pastel crayons can exceed 100 dollars which isnt an energy problem but it just goes to show the materialism and the wanton soul.

Any effort is good though but I agree with you it would be better to focus on the ones that would create the biggest impact.