Dyeing Our Nasal Hair To Look Vivid and Bright

For last few years, I have developed a strange habit. When I meet or see someone, I first look at his/ her hair to check if dye has been used.

On December 17, 2007, DD telecast live the ceremony- attended by the high and mighty of India- to release a postage stamp honouring the late S B Chavan.

The event was a sea of jet-black hair with very few grey islands!

India is young. And is younger if you discount hair colour!

Full disclosures- My wife dyes her hair and so does my mother-in-law. Both of them won’t be reading this post though!

Thanks to my DNA, I started turning grey very early. But so far I haven’t tried dyeing.

I agree with Edwina Ings-Chambers when she said:

” …I wonder about the effect that rising life expectancy has on our perceptions of age. I stopped caring about wrinkles when my father died, but friends who are 20 years older, but who still have their parents, happily obsess about those physical markers that signpost the route to death. I look at the ravages of time with interest - they are the visible terrain of our lives; they are, effectively, our memories.” (FT March 30, 2007)

But most people I meet at social functions want to look nice, smooth, glowing, untouched by woe and by time. They use what is called red-carpet dermatology. 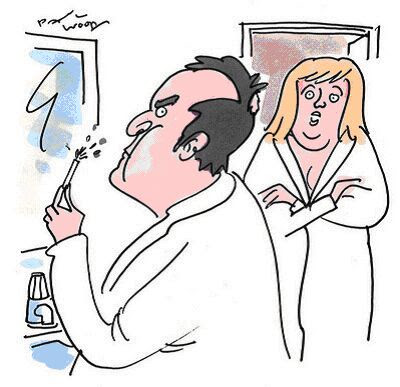