Shooting a Monk in Mandalay

Paul Theroux wrote in his “The Great Railway Bazaar” (1973)-one of the best books ever-“Nothing happens in Burma, but then nothing is expected to happen.”

Well, a lot is happening there finally.

Mandalay and Burma entered my consciousness very early because the last Mughal, Bal Gangadhar Tilak and Subhas Chandra Bose were imprisoned there.

George Orwell wrote one of the greatest essays in English language: “Shooting an Elephant”. It showed what was wrong with the British Empire, its sheer futility.

The shooting incident happened in Moulmein, in lower Burma.

Orwell writes: “…That is invariably the case in the East; a story always sounds clear enough at a distance, but the nearer you get to the scene of events the vaguer it becomes… But at that moment I glanced round at the crowd that had followed me. It was an immense crowd, two thousand at the least and growing every minute. It blocked the road for a long distance on either side. I looked at the sea of yellow faces above the garish clothes-faces all happy and excited over this bit of fun, all certain that the elephant was going to be shot. They were watching me as they would watch a conjurer about to perform a trick. They did not like me, but with the magical rifle in my hands I was momentarily worth watching. And suddenly I realized that I should have to shoot the elephant after all. The people expected it of me and I had got to do it; I could feel their two thousand wills pressing me forward, irresistibly. And it was at this moment, as I stood there with the rifle in my hands, that I first grasped the hollowness, the futility of the white man's dominion in the East. Here was I, the white man with his gun, standing in front of the unarmed native crowd – seemingly the leading actor of the piece; but in reality I was only an absurd puppet pushed to and fro by the will of those yellow faces behind. I perceived in this moment that when the white man turns tyrant it is his own freedom that he destroys. He becomes a sort of hollow, posing dummy, the conventionalized figure of a sahib. For it is the condition of his rule that he shall spend his life in trying to impress the "natives," and so in every crisis he has got to do what the "natives" expect of him. He wears a mask, and his face grows to fit it. I had got to shoot the elephant. I had committed myself to doing it when I sent for the rifle. A sahib has got to act like a sahib; he has got to appear resolute, to know his own mind and do definite things. To come all that way, rifle in hand, with two thousand people marching at my heels, and then to trail feebly away, having done nothing – no, that was impossible. The crowd would laugh at me. And my whole life, every white man's life in the East, was one long struggle not to be laughed at…”

And then he goes on to shoot the elephant.

The book also tells the tragic story of the last Burmese king (King Thebaw) who was exiled to Ratnagiri, Maharashtra.

Picture Below: Watching shooting of a monk? Unemployed youth in Yangon 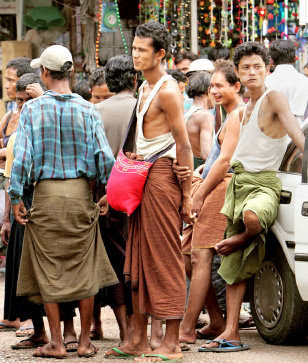 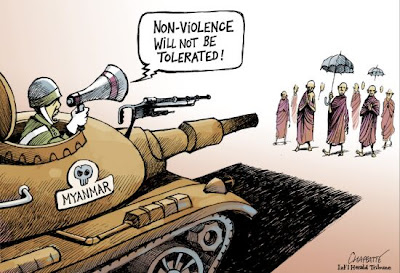