“....Although I recognized the house, I was actually seeing not the one in the photographs—which had been torn down in the 1920s—but a replica, built in the late ’40s. (Resurrecting destroyed buildings seems to be a national tic. In Moscow I saw a huge church with gold domes that was a recently completed replica of one of the churches Stalin wantonly tore down.) The interiors of Melikhovo had been carefully restored, re-created from photographs supplied by Maria Chekhova, then in her eighties. The rooms were small and appealingly furnished; they gave a sense of a pleasant, very well-run home. The walls were covered with Morris-print-like wallpapers, and over them paintings and family photographs hung in dense arrangements. Everything was simple, handsome, unaffected. But I think that Chekhov would have found it absurd. The idea of rebuilding his house from scratch would have offended his sense of the fitness of things. I can imagine him walking through the rooms with a look of irony on his face as he listened to the prepared speech of our tour guide, Ludmilla. Ludmilla was a youngish woman with glasses, dressed in trousers and a shabby maroon snow jacket, who was full of knowledge of Chekhov’s life but had read little of his work. She spoke of Chekhov with a radiant expression on her face. She told me (through Sonia) that a good deal of the furniture and many objects in the house were original; when the house was being torn down the local peasants had sacked it, but during the restoration returned much of what they had taken. I asked if they had been forced to do so by the Soviet authorities, and she said, “Oh, no. They did so gladly. Everyone loved Anton Pavlovich.” When I questioned her about how she came to be working at the museum she gave a long reply: She had never been able to read Chekhov; his writing left her cold. But one day she visited Melikhovo (she lived in a nearby town) and while in the house had had some sort of incredible spiritual experience, which she cannot explain. She kept returning to Melikhovo—it drew her like a magnet—and finally the director of the museum had given her a job.

After finishing her tour of the ersatz house and the disorderly garden, Ludmilla walked out to the exit with Sonia and me, and from her answer to one of my questions it appeared that she wasn’t paid for her work. “So you work here as a volunteer,” I said. “No,” she said, she just wasn’t paid, the way many people in Russia were not being paid now. Wages were frequently “delayed” for months, even years. I asked Ludmilla how she lived if she wasn’t paid. Did she have another job that did pay? Sonia—not relaying my question—looked at me angrily and said, “We will not talk about this. This is not your subject. We will talk about Chekhov.”

I debated with myself whether to challenge Sonia, and decided I would. I said, “Look, if we’re going to talk about Chekhov, we need to say that Anton Pavlovich cared about truth above all else. He did not look away from reality. People not being paid for work is something he would have talked about—not brushed away with ‘Let’s talk about Chekhov.’ ” I sounded a little ridiculous to myself—like someone doing an imitation of a character in a socialist realist novel—but I enjoyed Sonia’s discomposure, and when she started to answer I cut her off with “Tell Ludmilla what I just said.” Sonia obeyed, and Ludmilla, smiling her sweet smile, said, “This is why I find it hard to read Chekhov. There is too much sadness in it. It is his spirituality that attracts me—the spirituality I receive from learning about his life.”...” 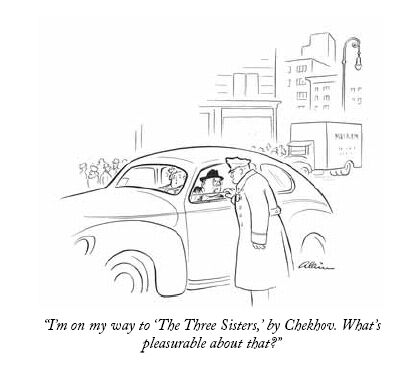