“...The life of a bacterium is built around food. Bacteria don't have mouths or fingers or Wolf Ranges, but they eat. They digest. They excrete. Like us, they break their food down into its more elemental components. The enzymes in our stomachs break meat down into proteins. The bacteria in our gut break those proteins down into amino acids; they take up where we leave off. When we die, they stop feeding on what we've eaten and begin feeding on us. And, just as they do when we're alive, they produce gas in the process. Intestinal gas is a waste product of bacteria metabolism.
The difference is that when we're alive, we expel  that gas. The dead, lacking workable stomach muscles and sphincters and bedmates to annoy, do not. Cannot. So the gas builds up and the belly bloats...
... Bloat is typically short-lived, perhaps a week and it's over. The final stage, putrefaction and decay, lasts longest.
Putrefaction refers to the breaking down and gradual liquefaction of tissue by bacteria. It is going on during the bloat phase—for the gas that bloats a body is being created by the breakdown of tissue—but its effects are not yet obvious.
Arpad continues up the wooded slope. "This woman over here is farther along," he says. That's a nice way to say it. Dead people, unembalmed ones anyway, basically dissolve; they collapse and sink in upon themselves and eventually seep out onto the ground. Do you recall the Margaret Hamilton death scene in The Wizard of Oz? ("I'm melting!") Putrefaction is more or less a slowed-down version of this. The woman lies in a mud of her own making. Her torso appears sunken, its organs gone—leached out onto the ground around her.
The digestive organs and the lungs disintegrate first, for they are home to the greatest numbers of bacteria; the larger your work crew, the faster the building comes down. The brain is another early-departure organ.
"Because all the bacteria in the mouth chew through the palate," explains Arpad. And because brains are soft and easy to eat. "The brain liquefies very quickly. It just pours out the ears and bubbles out the mouth."
Up until about three weeks, Arpad says, remnants of organs can still be identified. "After that, it becomes like a soup in there." Because he knew I was going to ask, Arpad adds, "Chicken soup. It's yellow."
Ron turns on his heels. "Great." We ruined Rice Krispies for Ron, and now we have ruined chicken soup.
Muscles are eaten not only by bacteria, but by carnivorous beetles. I wasn't aware that meat-eating beetles existed, but there you go....
...There is a passage in the Buddhist Sutra on Mindfulness called the Nine Cemetery Contemplations. Apprentice monks are instructed to meditate on a series of decomposing bodies in the charnel ground, starting with a body "swollen and blue and festering," progressing to one "being eaten by…different kinds of worms," and moving on to a skeleton, "without flesh and blood, held together by the tendons." The monks were told to keep meditating until they were calm and a smile appeared on their faces. I describe this to Arpad and Ron, explaining that the idea is to come to peace with the transient nature of our bodily existence, to overcome the revulsion and fear. Or something...”

Peter Conrad, review of 'Leonardo and the Last Supper', 2012 by Ross King, 'The Observer':
"...King wants to believe that great art lasts for ever, so he argues that The Last Supper has enjoyed, like Christ, "a kind of resurrection" in Warhol's silk screens or the cloned version that Peter Greenaway manufactured with an inkjet printer. But I wonder if Leonardo didn't intend it to decay. He knew that creativity fights a losing battle with destruction and that art cannot outwit nature: what better way to illustrate those morbid truths than to produce a miraculously beautiful painting that almost immediately begins to revert, like the bodies and minds of all who look at it, to unformed chaos?" 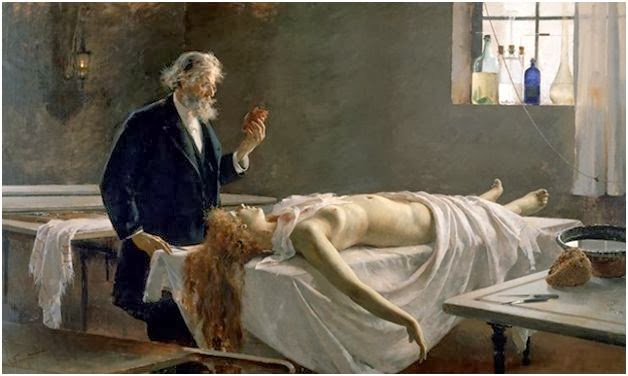 'Anatomy of the heart; And she had a heart!; Autopsy'