"It does not take new accident data from the National Crime Records Bureau to confirm that India’s roads, bursting at the seams with about 141 million motorised vehicles in 2012, are deadly. The Centre has been ignoring the shameful toll of death and disability for years, responding only with token measures. State governments mostly limit themselves to granting meagre compensation to the families of victims, instead of engaging in serious reform. That 139,091 lives were lost on the roads last year seems to be an insignificant statistic, given the extraordinary indifference among policymakers to a worsening public health disaster. There is even less attention paid to the burden of disability caused annually by crash injuries. Studies show that figure could be 15 to 20 times the number of deaths..."

“I believe in my own obsessions, in the beauty of the car crash, in the peace of the submerged forest, in the excitements of the deserted holiday beach, in the elegance of automobile graveyards, in the mystery of multi-storey car parks, in the poetry of abandoned hotels.''

If my 19th century ancestors, I often think, who never saw 20th century,  were to return today, they would be surprised most not by mobile phones, not by television /radio, not by inhouse plumbing and electricity, not by antibiotics, not by aeroplanes, not by computers but how difficult it has now become  for a pedestrian to walk on a road in Pune even between 6:30 AM to 10 PM.

This is what happened to a family, related to us from my my wife's side, because of an automobile accident: A young man having a pregnant wife meets with an accident near Chembur, Mumbai. He is riding  a motor bike. He does not die. He goes into coma.  He wakes up from coma but never fully recovers. His parents sell off almost all their assets treating him and go broke. His sister shelters them in another city. His wife and kid leave him. His parents die. Bedridden he, looked after by his sister and her family, survives.

I haven't read or heard a more tragic middle-class tale than this.

J G Ballard says about his creation:  "Crash is less a hymn to death than an attempt to appease death, to buy off the executioner who waits for us all in a quiet garden nearby, like [Francis] Bacon's headless figure in his herringbone jacket, who sits patiently at a table with a machine gun beside him."

For Indians like me, he waits impatiently for us all on a chaotic, noisy, familiar city road with an IC engine beside him. 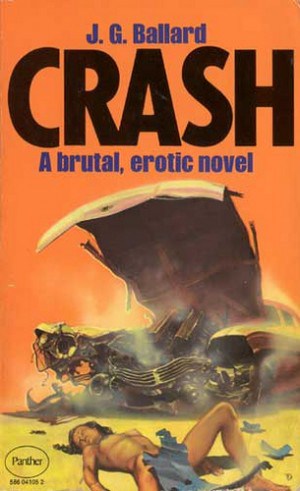 Artist: Unknown to me
Posted by Aniruddha G. Kulkarni at 9:00 AM