"Modern society tends to regard itself as somehow better than previous ones, and technological advance reinforces that sense of superiority. But history teaches us that there is nothing new under the sun. Robert Darnton, an historian at Harvard University, who has studied information-sharing networks in pre-revolutionary France, argues that “the marvels of communication technology in the present have produced a false consciousness about the past—even a sense that communication has no history, or had nothing of importance to consider before the days of television and the internet.” Social media are not unprecedented: rather, they are the continuation of a long tradition. Modern digital networks may be able to do it more quickly, but even 500 years ago the sharing of media could play a supporting role in precipitating a revolution. Today’s social-media systems do not just connect us to each other: they also link us to the past."

"....journalism may be the greatest plague we face today- as the world becomes more and more complicated and our minds are trained for more and more simplification...

"The new middle class is not just a challenge for authoritarian regimes or new democracies. No established democracy should believe it can rest on its laurels, simply because it holds elections and has leaders who do well in opinion polls. The technologically empowered middle class will be highly demanding of their politicians across the board"

This refers to the leader in Marathi daily Loksatta (लोकसत्ता) on July 4 2013. If you read Marathi, read it here.

I read it twice to make some sense out of it. I could not.

My confusion first started with the word used in the title: 'रिअ‍ॅक्शनरावांचा राडा' (Mess of Messrs Reactions)

I did not know there was a word like 'रिअ‍ॅक्शनराव' (Reaction-rao) in English/ Marathi. Was it 'रिअ‍ॅक्शनीराव' (Reactionary-rao)? When I saw the web address, it reads  "mess of reactionaries". So it indeed was 'रिअ‍ॅक्शनरीरावांचा राडा'!.


Let me now turn to the contents of the piece. It confused me more even after replacing 'reactions' with 'reactionaries'.

The leader starts with :

(It's dangerous that a class, without offering a solid alternative, expects a change in  the political system it hates without participating in it, using media such as Twitter and Facebook. The recent uprisings across the world have the same thread: 'Messrs Reactionaries' who while exploiting the system use the language of discarding it have no political base.)

Is it an attack on the mostly middle-class people who think they can usher in a revolution or an alternative system using tools like Twitter and Facebook? Is it also an attack on recent uprisings and such movements? Does the newspaper imply that 'reactionaries' use social media to instigate not-fully-thought-through uprisings against the establishment?

Reactionary is by a definition 'an extreme conservative; an opponent of progress or liberalism'.

Therefore, you can call  these people- who either take part in such uprisings or accompanying social media movements- anything but reactionaries!

On the contrary,  these people are progressivists (those who favor progress toward better conditions in government and society)! Some of them  may be extremely naive even arrogant but they aren't reactionaries and some may just be responding to their wife's- I assume- nagging- "Why don't you start something?"- as in the picture below. 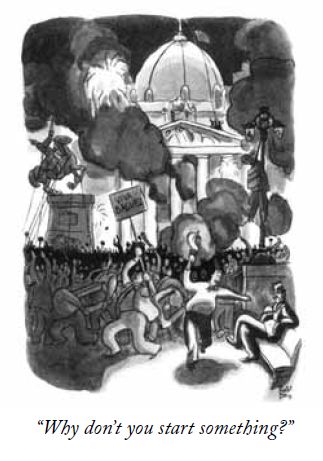 
As The Economist quote at the top says, there is nothing new about social media. We always had social media and also the smart people to leverage it to precipitate a revolution. Therefore, why blame 'new' social media?

In any case,  as Chris Lehmann explains below, they only played a marginal role in Egypt in 2011?


"Social networking mattered in Egypt, but the root causes of the uprising were scarcity, official corruption and social conflict, none of which fit the cyber-utopian narrative or flatter America’s technological vanity. The original scheduled protests of January 25 arose out of a past effort to organize an anti-Mubarak general strike, and it was the spread of the protests to the less wired workers in Egypt’s long-pinched labor economy that helped furnish the telling last blows to the Mubarak order. According to many reports from Cairo, the protests continued to gain momentum not from tweets or Facebook posts but instead from the direct spectacle of the populace congregating, We the People style, in Tahrir Square. Most Egyptians were following events on state television, which was parroting the official propaganda approved by the Mubarak regime, holding that the protests were the handiwork of foreign agitators. Not being regular blog readers, ordinary Egyptians went into the streets and saw that the state media were lying, that the protesters were their neighbors, their family members, their co-workers. The effort to coax a new political order into being grew from the power of popular witness, filtered through the evidence of citizens’ own eyes and ears."


(Note- TV did not help the change-seekers!)


Even then there were many skeptical about happenings there.

"But there is a final lesson from ancient Egyptian history that those urging regime change should heed. Today, tanks stand guard beside the Pyramids of Giza, the grandest symbols of authoritarian rule ever built. The pyramids sum up the unbridled confidence of ancient Egypt at the height of its power. The pyramid-builders must have assumed that the glories of pharaonic civilization would last forever. What brought the Age of the Pyramid to an end in 2175 B.C. was not war, invasion, or pestilence, but a political vacuum following the demise of a long-lived ruler. Factionalism and paralysis beset the Egyptian government, the economy collapsed and the country was plunged into a protracted civil war.
Egyptian history has a depressing habit of repeating itself. Let us all hope that, in this last respect, it does not."

If you accused Mr. Wilkinson of being a reactionary in 2011, you may now laud him as a visionary!

Does Loksatta expect people who start or instigate uprisings to fully think through their consequences and only after suggesting a solid alternative to the existing order? Has recorded history worked like that?

"How a revolution erupts from a commonplace event—tidal wave from a ripple—is cause for endless astonishment. Neither Luther in 1517 nor the men who gathered at Versailles in 1789 intended at first what they produced at last. Even less did the Russian Liberals who made the revolution of 1917 foresee what followed. All were as ignorant as everybody else of how much was about to be destroyed. Nor could they guess what feverish feelings, what strange behavior ensue when revolution, great or short-lived, is in the air...

...A curious leveling takes place: the common people learn words and ideas hitherto not familiar and not interesting and discuss them like intellectuals, while others neglect their usual concerns—art, philosophy, scholarship—because there is only one compelling topic, the revolutionary Idea. The welltodo and the "right-thinking," full of fear, come together to defend their possessions and habits. But counsels are divided and many see their young "taking the wrong side." The powers that be wonder and keep watch, with fleeting thoughts of advantage to be had from the confusion. Leaders of opinion try to put together some of the ideas
afloat into a position which they mean to fight for. They will reassure others, or preach boldness, and anyhow head the movement. Voices grow shrill, parties form and adopt names or are tagged with them in derision and contempt. Again and again comes the shock of broken friendships, broken families. As time goes on, "betraying the cause" is an incessant charge, and there are indeed turncoats. Authorities are bewildered,
heads of institutions try threats and concessions by turns, hoping the surge of subversion will collapse like previous ones. But none of this holds back that transfer of power and property which is the mark of revolution and which in the end establishes the Idea." 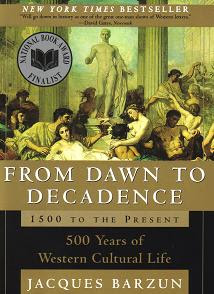 courtesy: Wikipedia
Posted by Aniruddha G. Kulkarni at 9:00 AM


I completely agree. We can only debate, but it is always too early to pass a concluding remark. But journalists seem to be obsessed with that.

"....journalism may be the greatest plague we face today- as the world becomes more and more complicated and our minds are trained for more and more simplification".