"Lord, enlighten thou our enemies. Sharpen their wits, give acuteness to their perceptions, and consecutiveness and clearness to their reasoning powers. We are in danger from their folly, not from their wisdom: their weakness is what fills us with apprehension, not their strength."

"To account for the Fukuyama/Wilson faith that mankind can achieve conscious mastery of its evolution, we need to look back to an early 19th-century cult - French positivism. Led by thinkers such as Henri Saint-Simon and Auguste Comte, the positivists were the inventors of the religion of humanity that has inspired the secular religions of the past two centuries. They had many eccentricities, including a version of the Catholic practice of crossing oneself in which they tapped the parts of the cranium believed by phrenologists to be connected with order and progress, but their religion has been vastly influential. It inspired not only Marx but also, through John Stuart Mill, many liberals, and it stands behind the faith in progress that is shared by all parties today."


Ben Yagoda, “When You Catch an Adjective, Kill It”:

"The nineteenth-century philosopher John Stuart Mill holds out a temptingly lofty rationale for a consideration of the parts of speech, claiming that they represent fundamental categories of human thought."

This is in continuation of my earlier post dated May 22 2013.

["Footnotes mentioned (John Stuart) Mill's and (Herbert) Spencer's thoughts were similar (to Bhagavad Gita's or Tilak's?). This can be described as the bold sign of poverty of intellect of those times.

If one comprehends the fact that Mill's and Spencer's books were sort of 'text' books, one realises about the nature of the then thought-leadership of Maharashtra... "]

I strongly disagree with the assertion that quoting of JSM was a sign of poverty of intellect.

Shahane is free and maybe even justified to fault the then Maharashtra's thought-leadership but he can't blame the problem on Mill.

A part of it reads as follows:

("....John Stuart Mill-saheb, in next birth if I can learn sitting at your feet, I will have great satisfaction. I will get that pleasure only if you could become my dearest and most respected teacher and if I could be your most humble and incognito student...",

Why is Mr. Shahane so much dismissive of Mill? (Btw- Why doesn't Mr. Shahane see G G Agarkar as a great Socratean figure?...More on this some other time.)

It's most likely because Nietzsche's antipathy towards British utilitarianism, expressed in the cartoon below, and its greatest proponent JSM : "Man does not strive for happiness, only the English do that."

(This is how John Gray talks about Nietzsche:

"Like innumerable, less reflective humanists who came after him, Nietzsche wished to hold on to an essentially Christian view of the human subject while dropping the transcendental beliefs that alone support it. It was this impulse to salvage a religious conception of humankind, I believe, that animated Nietzsche's attempt to construct a new mythology. The task set by Nietzsche for his imaginary Superman was to confer meaning on history through a redemptive act of will. The sorry history of the species, lacking purpose or sense until a higher form of humanity came on to the scene, would then be redeemed. In truth, Nietzsche's mythology is no more than the Christian view of history stated in idiosyncratic terms, and a banal version of it underpins nearly all subsequent varieties of secular thought. ")

Commenting on the list of current thinkers / intellectuals published by Foreign Policy magazine in 2011 and comparing it to an imaginary list prepared in 1861, Gideon Rachman says:


"...It is an impressive group of people (from 2011). But now compare it with a similar list that could have been compiled 150 years ago. The 1861 rankings could have started with Charles Darwin and John Stuart Mill – On the Origin of Species and On Liberty were both published in 1859. Then you could include Karl Marx and Charles Dickens. And that was just the people living in and around London. In Russia, Tolstoy and Dostoevsky were both at work, although neither had yet published their greatest novels. Even if, like Foreign Policy, you have a preference for politicians, the contrast between the giants of yesteryear and the relative pygmies of today is alarming..."

Look at the company JSM keeps in the statement above- Darwin, Marx, Tolstoy, Dostoevsky....(I don't say Dickens because very likely Mr. Shahane is dismissive of him!).

John Gray remains a fan of  JSM for:

"Not his utilitarianism, not his belief in progress, not his Victorianism - but his eclecticism. He took things from different systems of thought. The truth about human civilisation is very unlikely to lie in some single form. Which he understood."

'The truth about human civilisation is very unlikely to lie in some single form.'?...Even Shahane's 'darling'  Soren Kierkegaard would be impressed! 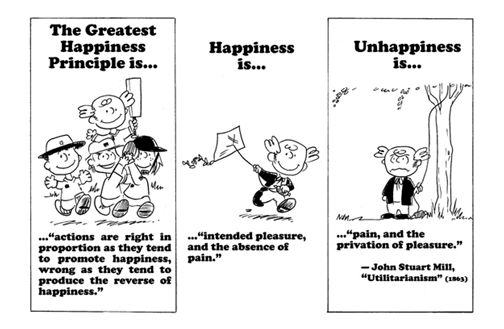 This is interesting. Being an Indian, I was raised believing (and after deliberation, I too believe) that happiness is not dependent on pleasure/sorrows, and in fact that pleasure's not even a factor in happiness. True happiness is freedom from the duality of pleasure/sorrow, as many of our sages from A to Z (Advaita to Zen) repeatedly teach.

Even then, I wonder, why GGA, the wise man that he was, would follow JSM. What're your own thoughts on happiness? Would love to read.

I'm amused that GGA, the wise man that he was, thought highly of JSM. Our sages of A-Z traditions (Advaita to Zen) have repeatedly taught that happiness doesn't depend on pleasure/pain, but it's about the freedom from the duality of pleasure/pain (which are only the reactions of your mind to a reality that doesn't even ask your reaction or opinion). I wonder what your own thoughts on happiness are.

I am not sure if GGA went with JSM on the subject of happiness. He was 'smitten' with JSM's ideas of utilitarianism, progress and liberty.

But if even if he did, I understand him because I believe they were confusing times for educated Indians.