I look forward to the book.

However,  I was startled by this part of their preface:

(Pune 'Resident' Malet during the reign of Sawai Madhavrao had invited artist James Wales and asked him to paint a majestic picture. That picture was of a tripartite treaty between the British, Maratha and Tipu sultan done on August 6 1790...) 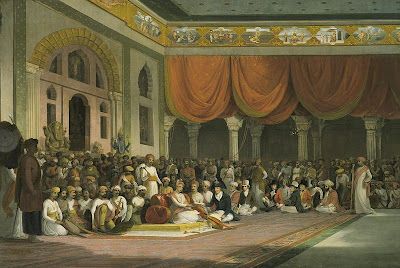 I have already written about this picture on September 23 2007.

Like the picture above, funnily there are two blunders in Bahulkar/Ghare statement as well!

1:  The artist of the picture is Thomas Daniell and NOT James Wales.

(p.s. It has been claimed that the painting was started by James Wales and his team but completed by Thomas Daniell. Visit here to read about it.)

2:  The treaty was NOT with Tipu sultan but it was AGAINST HIM. It was among the Nizam , Marathas and the British! If Marathas and Tipu sultan had come together, the history of India would have turned out to be quite different. The British were most scared of that possibility. The way USA is scared today of India and China coming together.


If the book on the history of art starts with such bloomers, can I trust such a book for anything else other than  pretty pictures in there?