"How many Ramyanas? Three hundred? Three thousand? At the end of some Ramayanas, a question is sometimes asked: How many Ramayanas have there been? And there are stories that answer the question...."

"Among the less select circle of ordinary educated people there  is breadth of culture that is sometimes missed by outsiders because it is not all in English. Few in our country know Greek and Aramaic as some of these people know Arabic and others Sanskrit. Few can recite Latin poetry with the delight that these people find in Persian couplets and the Ramayana. But even more general than that, the conversational level among educated Indians is high. Their interests are broad and their tongues usually adept at expression. They are cultured."

"Not only that. Like every other major religion, Hinduism also gave rise to a major reservoir of high culture – metaphysics, poetry and mathematics in particular. To dismiss or undervalue such riches of the subcontinental past would be as philistine a self-mutilation as a breezy ignorance of Christian art or thought would be in the West or the classical corpus in China. Outstanding among them, too, were the great epics of Hindu legend, the Mahabharata and the Ramayana, which unlike the Odyssey or the Aeneid, are still in such absolute command of popular imagination that their dramatisation on television could not only mesmerise hundreds of millions of viewers, but occasion many a literal act of worship before the small screen. If Gandhi could in all seriousness advise Congress in 1947 that partition was no more definitive than Ravana’s abduction of Sita to Ceylon, where Rama would reclaim her; or the law minister of a communist-supported government in Delhi, assuring the Supreme Court of his faith in the divinity of Rama, defer as potential sacrilege the dredging of the Pamban channel across which Hanuman’s monkey army built a bridge to rescue Sita – who should be impious enough to gainsay them? Accommodation of fervours like these, inspired by so popular a literary masterpiece, might be held common prudence on the part of a state equi or flexi-distant from all religions. Indian secularism can encompass them all."

Ramayana has appeared on this blog many times.

That along with Mahabharata must be the most read book by me.

And I like illustrated versions of them. I feel good picture are like annotations. They give me time to pause, imagine and reflect.

I have never looked at Rama as a god but as a very sincere, honest, upper-caste, rich guy who,  although very much product of his time, tried to do good all his life. I don't know if he succeeded or failed. And therefore he remains interesting.

I don't know when and where first illustrated Ramayana was prepared.

Emperor Akbar commissioned one in year 1588 with 166 miniatures followed by Rana Jagat Singh of Mewar.

As is true of composite culture of India, this Ramayana was commissioned by a Sikh (Rana Jagat Singh), Sanskrit text in there owes a debt to a Hindu storyteller (Mahatma Hirananda), and was illustrated by a Muslim (Sahib Din).

Here are some of the contents on pages 13 and 14 with some commentary.

"The exiles have headed south from Ayodhya. When they reached the shore of the holy river Ganges Rama sent Sumantra back with the chariot and horses. The three were taken in a boat across the river by Guha the local king and made for the hermitage of the sage Bharadvaja at Prayaga where the rivers Ganges and Jumna meet. Bharadvaja advised them to make for the mountain Citrakuta a short distance away on the other side of the Jumna, a delightful spot frequented by other sages. The exiles have reached the mountain and built a hut near to the river Jumna.

Laksmana hunts for deer on Rama's instructions, so that they may make offerings to the presiding deities of the place. Laksmana cooks the venison on skewers rather than boiling it as in the text and Rama makes the offerings. Sahib Din, again contrary to the text, depicts the two brothers eating while Sita waves a scarf over the food; and she then retires to the hut to eat her own meal. This picture demonstrates the format used by Sahib Din for a forest landscape, with a river at the foot of the picture, a foreground surrounded by trees where the action takes place and a backdrop of vertically striated purple rocks. The two-banded sky is typical of early Mewar painting."

Now,  no Ramayana I read as a kid even had a hint of Rama and Laksmana eating the venison! I wonder why.

And this version shows- picture just below-  them eating the one cooked on skewers...kebabs 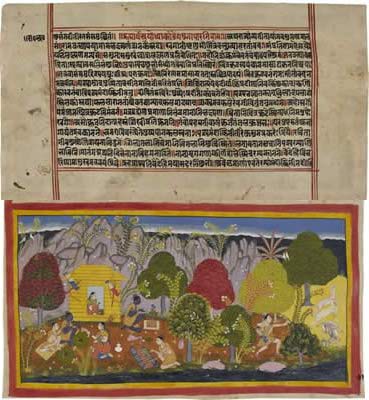 (As I have said a couple of times before, I saw dozens of beautiful deer from touching distance on the campus of IIT, Madras. I never felt like eating them! But c 1991, courtesy a tribal chief, once I ate small potion of venison curry in Arunachal Pradesh by the side of the river that had ice-cold , deep blue water. That basic tribal recipe tasted very good. There were no skewers on display there.) 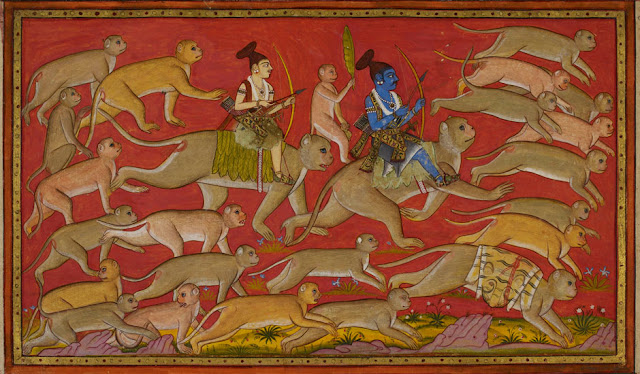