The Sure of the Mumbai Locals, Straphanging and Palmistry

( I remember the above couplet from my 9th standard history school text. Any error in reproduction is regretted.)

"...The narrative takes on its most epic quality in the United States; its most stupid in Australia (where the different states set about building a charming variety of gauges without a thought about what would happen when you tried to link them up); and its most brutal in India, where maybe 25,000 workers died building the line through the Western Ghats alone..."

(Review of  "Blood, Iron and Gold: How the Railways Transformed the World" by Christian Wolmar,  Guardian,  November 29 2009)


The first train ran at 3:35 pm on April 16th, 1853, when 14 railway carriages and 400 guests left Bombay's Bori Bunder for Thane, with a 21-gun salute. It was hauled by three locomotives: Sindh, Sultan, and Sahib. The journey took an hour and fifteen minutes.

The freedictionary.com defines 'straphang' as:  "To travel as a straphanger", as on a subway or bus and straphanger as "One who grips a hanging strap or similar device for support while riding as a passenger on a bus or subway."

Now, I have traveled quite a bit on Mumbai local trains, often in second class, luckily not often during the rush hours, and, more importantly, against the flow of the majority (i.e. traveling towards South in the evenings and North in the mornings).

I thought I knew a little about straphanhging and then one day I took a fast train around 5 PM from VT  and alighted (?) at Ghatkopar.  I felt my education in  straphanhging or simply hanging-for-dear-life was complete. 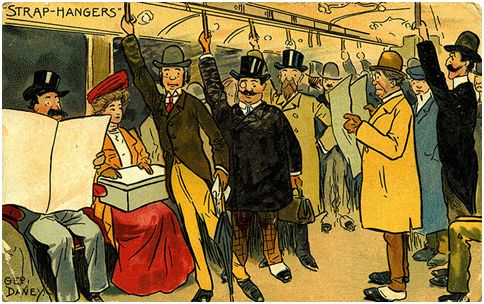 1905: Comic card from the District Railway, whose electric trains defied the underground's reputation for slowness and unreliability, and taught passengers the new skill of 'straphanging' during rush hours

More interesting is the following picture where it says the lure of the Underground...the way they are getting sucked into the tube station....Mumbai local commuters can identify better with the word sure because the inevitability of locals in their lives 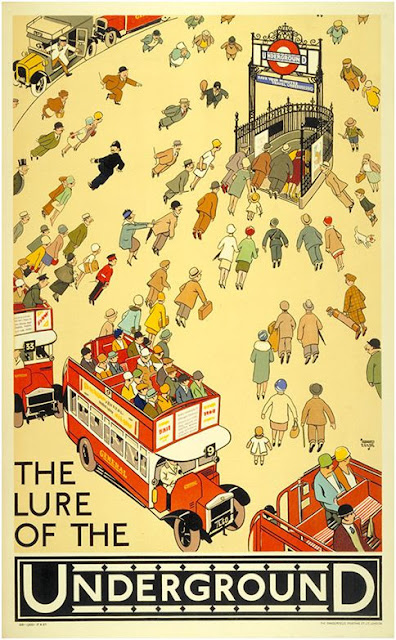 Now, look at the following picture of inside of a Mumbai local.

People are hanging on to straphangers or bars. There is lots of pushing and shoving. But not all are irritated.

Look at the smiling man at the centre  of the picture wearing a headgear. He is looking at the open palm of the man standing next to him and lo, he sees a better future there! 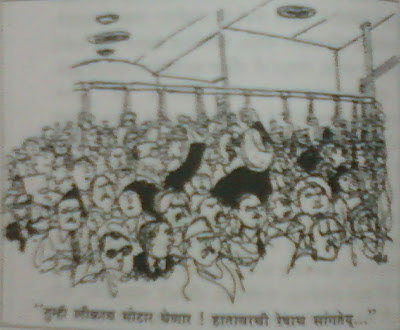 caption: "You are soon buying a car ! Line on your palm only is telling it...."

(note- This is Sarwate's early cartoon, first published decades ago)

I buy one Marathi and two English dailies and I did not see even a mention of this anniversary in them.

However, today morning I was glad to see that Google had decided to celebrate it, doodle style.

courtesy: Google inc.
Posted by Aniruddha G. Kulkarni at 9:00 AM

I have to send you my copy or its copy...if you are coming to Pune and we meet, I will give it to you. Then you can copy and send back to me the original...

I am also tempted to read the book 'Ticket Please' by Mr. Sarang Chapalgaonkar. It's a problem how to get it. Please let me know your Pune address on my e-mail id. I may visit Pune soon. Regards.
Mangesh Nabar