We Cried for Boxer and Shyamchi Aai

He has appeared on this blog many times but he has been with me ever since my father translated "Animal Farm" into Marathi  "...Aani Kranticha Mudada Padala" (...आणि क्रांतीचा मुडदा पडला) - "...And the revolution's corpse fell"- around 1970.

But we read the book many times. We imagined all those animals using our little imaginations. And we cried for Boxer.  The way we cried for "Shyamchi Aai" (श्यामची आई).

Since then I have read most of Orwell in English but not 'Animal Farm'. My father's translation is still good enough for me.

There is tons of pro and anti-Orwell material on internet but I liked best what  Barry Gewen said recently about him:

"...Orwell was against abstractions of every kind: fascism, Communism, especially nationalism; “Americanism,” he once said, was a term that could easily be used for totalitarian ends. His socialism was pragmatic, anti-utopian, perhaps little more than an expression of his hope that the conditions of the poor and the powerless could be improved...He was a friend of the common man who also had an appreciation of James Joyce. He was a socialist with little hope for real change unless decency could somehow prevail..." 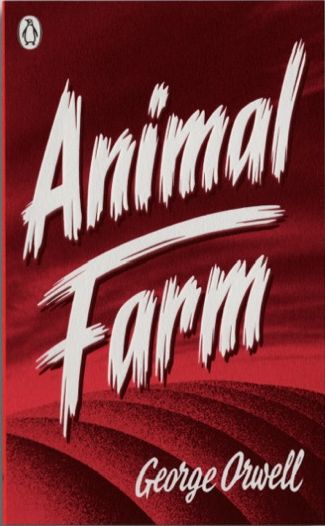 New cover of the book

"The deep foreboding red of the Animal Farm cover evokes the political charge of Orwell's allegorical novel of 1945 – the type treatment managing to look jauntily cinematic and cartoon-like, and wholly unnerving at the same time." 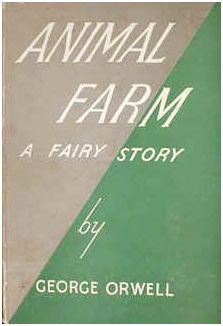 Old cover of the book

courtesy: History Today
Posted by Aniruddha G. Kulkarni at 10:35 AM

Recently read 'Karl Marx : Vyakti ani Vichar' by Vishawas Patil. This Vishwas Patil is the one who edited a quarterly journal called 'navee kshitije'. One among the group that gathered at Asiatic Society library, Mumbai.

I did not know Mr. Pail had written books and edited a journal. Thanks for letting me know.

I only knew him as highly regarded person at Asiatic. (courtesy: Durgabai Bhagwat and Pratibha Ranade)

I don't know if you have also seen Prabhakar Padhye's book on Marx. It made a good impression on me as a school kid.

I once was a Marxist who believed in violent revolutions. Especially, after reading Anil Barve's poetic "Thank you Mr. Glad". But those days are long gone.

George Orwell:"...The moralist and the revolutionary are constantly undermining one another. Marx exploded a hundred tons of dynamite beneath the moralist position, and we are still living in the echo of that tremendous crash. But already, somewhere or other, the sappers are at work and fresh dynamite is being tamped in place to blow Marx at the moon. Then Marx, or somebody like him, will come back with yet more dynamite, and so the process continues, to an end we cannot yet foresee. The central problem — how to prevent power from being abused — remains unsolved..."

I have not seen Padhye's book.

I'm half your age, and more than half of the things you mention on this blog are discovery for me :)

You certainly know more than what I knew at your age. You also seem to carry wiser head than me @26!

Also, I would love if you communicated with me in Marathi. It's just that I am lazy to type in Marathi and my Shuddhalekhan is screwed up!