Marathi news channels  reported on the afternoon of January 25 2013 that Mangesh Padgaonkar (मंगेश पाडगांवकर) was likely to be honoured with 'Padma Bhushan'. 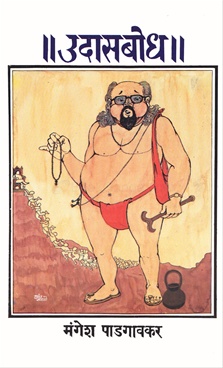 "....Padgaonkar was little stunned seeing himself wearing a loincloth and  expressed it to the late S P Bhagwat , Bhagwat said 'lucky at least a loincloth is shown!'..."

I was impressed with Bhagwat's sense of humour.


I wish Jaywant Dalvi (जयवंत दळवी) 'Thanthanpal' (ठणठणपाळ) were to be alive today. I wonder what he would have come up with on Mr. Padgoankar. Thanthanpal was very fond of Padgaonkar.

Finally, I too am glad that Sarwate showed the loincloth. You can't show a Padma awardee without one, can you?
Posted by Aniruddha G. Kulkarni at 3:22 PM

Most appropriate post and sketch by Shri. Vasant Saravate. Thanks.
Mangesh Nabar