Literature in the Time of Plague and Flu

John Gray: The peace and prosperity of one generation stand on the injustices of earlier generations; the delicate sensibilities of liberal societies are fruits of war and empire. The same is true of individuals. Gentleness flourishes in sheltered lives; an instinctive trust in others is rarely strong in people who have struggled against the odds. The qualities we say we value above all others cannot withstand ordinary life.

Wikipedia: The 1918 flu pandemic (the Spanish Flu) killed as many as 17 million in India, about 5% of the population.

I haven't read a single book of Philip Roth. Not even the one I have with me- 'The Professor of Desire'!

But I have read tens of reviews of his work.

"Philip Roth’s fifth short novel in five years is a perfectly proportioned Greek tragedy played out against the background of the polio epidemic that swept Newark, New Jersey, during the summer of 1944..."

Although some of us witness some pseudo scares like H1N1 in 2009 in Pune, we cannot even begin to understand what an epidemic does to a society. However, our not-very-distant-forefathers lived in such times.

Sadly, I have not come across many good Marathi books where an epidemic has cast a large shadow.

I am sure there are a few more that I have not read. But not many, not surely in the class of Roth, Joshi, Tilak and Diwakar at any rate.

Pune in 1897 was shaken by the murder of W. C. Rand of ICS by Chapekar brothers. Wikipedia claims that "This action of the Chapekars has been considered the worst violence against political authority seen anywhere in the world during the third plague pandemic."

Maybe but there is no good book- like say Godse Bhatji's (गोडसे भटजी) 'Maza pravas' (माझा प्रवास) for events of year 1857- in Marathi describing that epidemic, to make us relive those times in Pune.

Marathi poet Keshavsut (केशवसुत), 39 - who some consider a great one- and his wife died in a plague epidemic of 1905 at Hubli. He died on November 7 that year. There was some confusion on the exact date of his death. I was touched reading the efforts put in by Natyachhatakar Diwakar ['Samagra Diwakar' (समग्र दिवाकर) edited by Sarojini Vaidya (सरोजिनी वैद्य), 1996] to establish the correct date. (Diwakar himself died of flu at the age of 42.)

Sadanand Rege (सदानंद रेगे), whose brilliance and eclecticism are seldom matched in 20th century Marathi writings, has written a moving poem on this. 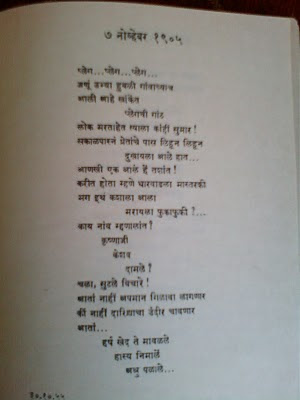 (double click on the image to get a larger, readable view)

[p.s. last three lines of the poem are from the best poem of Keshavsut 'Zapurza' (झपुर्झा). Just for inventing the word 'Zapurza', Keshavsut for me was an extraordinary talent.]

I said earlier that we cannot even begin to understand what an epidemic does to a society.

TONI BENTLEY: “Cosmetic surgery is now so prevalent that it could qualify as a national epidemic. And under all that Botox — the gateway procedure — as well as the face-lifts and tummy tucks, lies a sinister story, as deep as it is shallow.” 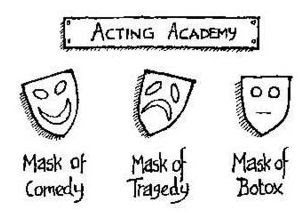 Courtesy: The Spectator
Posted by Aniruddha G. Kulkarni at 9:00 AM