“When it’s all added up, papa, it will be: he wrote a few good stories, had a novel and fresh approach to reality and he destroyed five persons – Hadley, Pauline, Marty [Gellhorn], Patrick, and possibly myself. Which do you think is the most important, your self-centred shit, the stories or the people?”

"In a sense William Shakespeare's greatest achievement in life wasn't writing Hamlet or the sonnets but just surviving his first year."

"What is more courageous, militancy or a middle-class life? Fleeing for freedom or remaining loyal to a family?"

I really like writings of Natyachhatakar Diwakar (नाट्यछटाकार दिवाकर) who was inspired by Robert Browning's dramatic monologues.

I have liked him since I was in primary school. Later, I discovered that I was in excellent company. Vijay Tendulkar (विजय तेंडुलकर), Sadanand Rege (सदानंद रेगे), Durga Bhagwat (दुर्गा भागवत), Madhav Julian (माधव जूलियन) too were his big fans.

(Similar to his poems on likes of Keshavsut केशवसुत, D G Godse द ग गोडसे and a few others, Rege has written a very moving poem on Diwakar.)

Reading it I learnt Diwakar lost his three out of four kids and wife during his rather short life: 1889-1931. (His only surviving daughter died within eight months of his death at the age of sixteen!)

Diwakar's only son, Ramchandra, lost his mother at the age of just three and he himself died at the age of eight. It means Diwakar was his only parent for almost five years.

And this is what Diwakar wrote in his diary when Ramchandra died:

"...son Ramu since birth was sickly and weak. But his luck was wretched! Only his mother, until her death, might have embraced him and cuddled him. But I - his father- don't remember if, in his entire life of eight years, I ever embraced him. Let alone kissing with affection etc..."

Will I - 'lucky bastard' who constantly got his mother's deep affection until he turned 46- ever begin to understand the pain of that sickly kid Ramu who lost his mother at the age of three and was ignored by his learned and 'ultra sensitive' father for the rest of his life?

Ramu's (and his sisters' and mother's) tragedy, in my eyes, dwarfs his father's entire literature.

Romantic Robert Browning won't do to help describe it. Shakespeare or, even better, Sophocles has to be summoned because it is he who supposed to have said "that to never have been born may be the greatest boon of all."

Would Diwakar have been a lesser man if he remained 'ordinary' by dedicating his limited resources towards cuddling kids, appreciating his wife's cooking, being grateful to his larger family's support in looking after him and his kids after his wife's death instead of pursuing higher arts?

Didn't he like kids? If he didn't, why did he produce them? (His wife died in child birth.)

If Ram Ganesh Gadkari (राम गणेश गडकरी)- who was Diwakar's friend- were to write a tragedy based on Diwakar's life, where the protagonist is addicted to books and intellectual pursuits instead of liquor, it would have been more tear-jerking than his celebrated play 'Ekach Pyala' (एकच प्याला) that describes how addiction to booze eventually destroys a happy family.

What are the forces that drive artists like Diwakar?

Was Diwakar following the tradition of 'romantics' from England?

Ben Downing argues reviewing a recent biography of Byron, Shelley and their circle (YOUNG ROMANTICS / The Tangled Lives of English Poetry’s Greatest Generation By Daisy Hay) that the women and children in their lives too suffered mightily.

"...But if you do read “Young Romantics,” be prepared to come away outraged and depressed. The real calamities here aren’t so much the early deaths of Shelley and Byron as those of their dependents.

Shelley’s abandoned first wife committed suicide, and all but one of the four children he had with his second wife, Mary, died young. Claire Clairmont, meanwhile, had the daughter she’d conceived with Byron imperiously stripped from her by the poet, who, quickly tiring of the girl, stuffed her in a convent, where she too soon died. There was also a baby of mysterious parentage, registered as Elena Shelley, who survived only 18 months. In short, the two poets left the Italian peninsula, along with a few spots in England, strewn with dead relations. While they cannot entirely be blamed, it’s hard not to conclude that their callousness, selfishness, impulsiveness and bullying demand for “free love” were ruinous to those around them (though in truth only Shelley idealized his lusts, the cynical Byron merely pouncing where he could).

This is hardly a fresh observation, of course, but it is powerfully reinforced by “Young Romantics,” which brings home to a rare degree just how destructive were the poets’ experiments in unfettered living. Even Leigh Hunt, a far more consistently kind and decent chap than Byron or Shelley, made his wife miserable by maintaining an uncomfortably close relationship with her sister and blithely failing to provide for his large brood.

Not that Hay harps on any of this. To her great credit, she never lapses into censoriousness, approaching all her characters, men and women alike, with just the right blend of detachment and sympathy. Yet by concentrating so steadily on their relationships, she inevitably draws attention to the imbalances and (as Clairmont insisted) cruelties within them. Her book winds up being as much a study of domestic arrogance as an exploration of friendship..."

Diwakar is not alone.

If I consider the 'romantics' writing in Marathi in first half of 20th century, the picture on their domestic front is not pretty.

So the dilemma I face is this: Do I still like as well as respect Diwakar?

Ms, Hokinson (1893–1949), who tragically died in a plane accident, is one of the great cartoonists I have come across.
She is one of a kind. I find no words to describe my pleasure when I see some of her pictures. Following is one such.
Is she quizzing us or amusing? Our technology may have gone far beyond the longplay records that are there in the picture but will we ever overgrow the feelings expressed there? 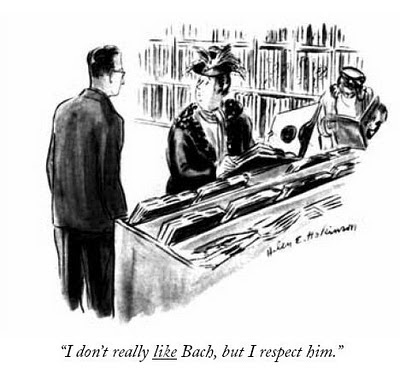