B S Mardhekar, Now there are Old Embers on New Corpses in Korean War

TOM NAGORSKI: "...When it came to war, Gen. MacArthur was merciless. As the battle for the North soured, MacArthur ordered an aerial bombardment to strike every possible "installation, factory, city and village" in the North. Cities across North Korea were reduced to ashes; hundreds of thousands of civilians were killed. Mr. Cumings asks why, when the conduct of World War II (the firebombing of Dresden, say) or Vietnam (My Lai) has been so thoroughly examined, U.S. tactics in Korea have merited so little attention. No one knows or remembers "that we carpet-bombed the North for three years with next to no concern for civilian casualties."..." (WSJ, July 27 2010)

Thanks to Bruce Cumings's new book "The Korean War: A History", the “forgotten war”- the one that has still not ended because it ended in an armistice, rather than a full peace treaty- is under a bit of spotlight.

B S Mardhekar’s (बा. सी. मर्ढेकर) few poems must be an exception because he was a poet with global sensibilities.

"अजून येतो वास फुलांना" (Still fragrance emanates from flowers) first published in February 1951, written probably in Trichy / Tiruchchirappalli, is one of them.

(Here a shake of a tremour
That side war-drums;
all around one hell of racket,
new embers on old corpses.")

Tremour here is the Assam one of August 15 1950. War drums belong to Korea.

7th stanza too refers to the war:

(To die after living a while
Like blinking of eyes;
through darkness radar's
ray moves ahead cutting.) 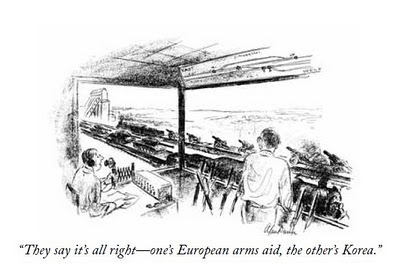 Sixty years later, the picture above remains relevant. Just replace Europe with Iraq and Korea with Afghanistan. Perpetual War for Perpetual Peace?
Posted by Aniruddha G. Kulkarni at 9:00 AM