I had mixed feelings. I was deeply stirred by its melodrama and use of Marathi but I also felt it was a tearjerker. (Read a related post on Ekach Pyala here.)

Play's protagonist Sindhu सिन्धु made a deep impression on me. But I wasn't attracted to her. I thought she was like many middle-class, largely Brahmin, women I came across in Miraj.

There was one very fair skinned, twenty plus, sharp-featured, five-yard saree-wearing Chitpavan Brahmin woman who passed by our house almost every day.

Wherever, any time of the day, she saw cow dung lying on a street, she stopped in her tracks, lifted it in her right palm, positioned that palm over her right shoulder, dung facing sky, and carried it to her house.

I thought Gadkari's Sindhu was like her except the length of saree as Sindhu surely wore nine-yard one.

How wrong I was!

For instance after a long separation from her husband Sudhakar, Sindhu, whose marriage is not that old, is looking forward to mating with him. She is humming a suggestive song to herself.

In short: Sex is on her mind.

Dhond reasons that the 'fourth day' also implies the last day of a woman's monthly menstruation cycle, when having suffered variously, including even lack of bath, on account of prevailing social customs, women looked forward to a reunion with their husbands.

I was fascinated by this. Now, Sindhu started to look like many attractive middle-aged married women one comes across.

It reminded me of Hitchcock's presentation of his blondes Grace Kelly, Kim Novak, Tippi Hedren.

Hitchcock: You know why I favor sophisticated blondes in my films? We're after the drawing-room type, the real ladies, who become whores once they're in the bedroom.

Truffaut: What intrigues you is the paradox between the inner fire and the cool surface.

Hitchcock: Definitely...Do you know why? Because sex should not be advertised...because without the element of surprise the scenes become meaningless. There's no possibility to discover sex. 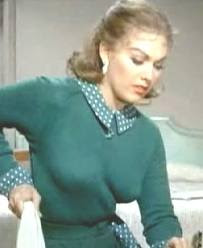 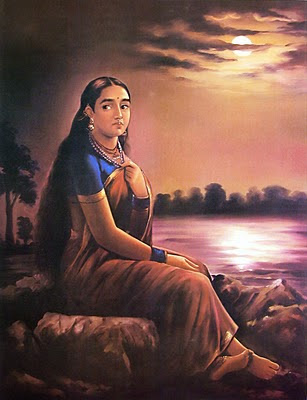 Is she Gadkari's Sindhu? And is that the fourth day moon?
Posted by Aniruddha G. Kulkarni at 9:00 AM