What did a Woman in the Kitchen have in common with its Floor?

Anton Chekhov: "My holy of holies is the human body..."

Indian religious code: "If a woman was menstruating, she was prohibited from Suttee, the act of a Hindu widow willingly cremating herself on the funeral pyre of her dead husband."

ROBIN MARANTZ HENIG: "The worst thing you could do when my mother was in one of her moods was to point out that she got cranky when she had her period. “I am not just a bunch of chemicals!” she’d yell. My brother, who even at 12 believed in the sanctity of data, decided to keep a written record of when Mom was irritable and see whether it correlated with what he could deduce about her menstrual cycle. It was hard to contradict the circumstantial evidence: when our mother had her period, she was harder to live with..."


Annie Hall,1977: "Alvy: Hey, you are in a bad mood. You must be getting your period.
Annie: I'm not getting my period. Jesus, every time anything out of the ordinary happens, you think that I'm getting my period."

Not too long ago, menstruation was NOT a taboo subject in Maharashtra.

For instance, historians like T S Shejwalkar (त्र्यं शं शेजवलकर), D G Godse (द ग गोडसे), have quoted a number of instances in their work when women’s monthly period was mentioned without any hesitation, even in official communication.

(After reading "no Suttee if menstruating" quoted earlier, I asked my wife if some widows could have faked it....I would. She said it would have been very difficult to do so in a joint family setup of medieval India).

But it all changed since the Victorian era began in England.

I wonder if a book like the one mentioned below will ever get written in Marathi. I am sure when it does, it will be one of the most interesting one.

Elissa Stein and Susan Kim have written a book "Flow: The Cultural Story of Menstruation".

"...apparently, plenty of girls still think they pee and bleed out of the same orifice, and menstruation is still understood with a retro blend of embarrassment, fear and superstition...

...Kotex pads burst onto the market the same year women got the right to vote, which was also the same year that saw the first Miss America pageant (that would be 1920)...

...And we learn that as late as 1985, a pre-Friends, pre-Cougar Town, pre-Arquette, Courteney Cox was the first person to use the word "period" in a TV commercial...

Flow revels in the awesome mysteriousness of women's bodies even as its authors try to counter it. It's hard to maintain both positions, though there's something appealing about being normal and mystifying at the same time. That's a central tension of how people have viewed women -- and how women have viewed themselves -- throughout history. Not surprisingly, the ambivalence about the role and significance of menstruation is equally entrenched.

Still, why talk about it? Stein and Kim are tuned in enough to pose that question directly, and their book stands as a pretty clear answer. Certainly, we don't have to talk about everything, but Flow shows that menstruation -- and women's many experiences of it -- are fodder for a host of worthwhile and often important conversations."

Q: What was common to a woman working in a kitchen and the kitchen floor?
A: Both were disinfected with Lysol, a household cleaner!

(For more, check out 'Related Media' by visiting this site.) 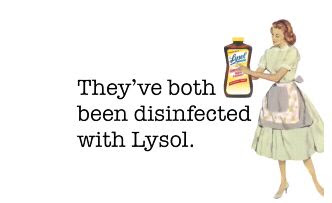 I have been reading your blog over a year now. Very impressive writing. Keep it up !