Raja Ravi Varma's Damayanti (featuring below left) always brings memories of Datta Mandir of Miraj. The temple displayed many images of his paintings based on the themes from Indian mythology.

"Damayanti was a princess of Vidarbha Kingdom. She was of such beauty and grace that even gods could not stop from admiring her. She fell in love with Nala simply from hearing about his virtues and accomplishments from a golden swan..." (Wikipedia)

To be honest, Varma's this painting doesn't do justice to the beauty of Damayanti. (In fact, I was never infatuated by his portraits of women. Diminutive, they all look slightly old in their nine-yard, pallu-covering-their-entire-bosom sarees.)

This is what swan said to Damayanti:"...Among men there no one like him. O Fair-faced One, if yon were only his wife! We have seen gods, Gandharvas,! snakes, und demons, but never a creature which was Nala's equal. You are the jewel of women; Nala is the most excellent of men. If you were to marry each other, your union would be the most distinguished in all the earth."

I came to know of Paul Delvaux while reading about J G Ballard. I find Delvaux's images of nude women most haunting, disturbing but attractive at the same time.

"...The young Delvaux took music lessons, studied Greek and Latin, and absorbed the fiction of Jules Verne and the poetry of Homer. All of his work was to be influenced by these readings, starting with his earliest drawings showing mythological scenes..." (Wikipedia)

Where is Delvaux's Damayanti looking? What did the swan tell her?

World is a small place. 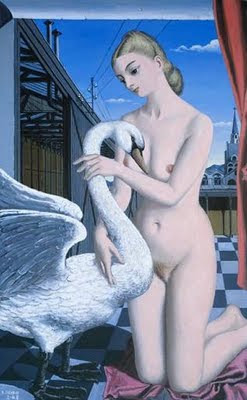 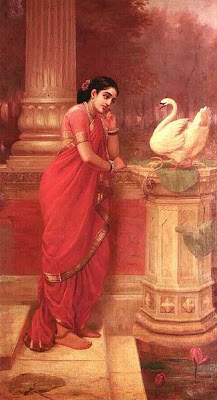 I new him when my dad read his poems to my daughter.

When he died, a few of his poems were all over the papers. I could not control myself, I translated and sent the following to all I knew. One called it brutal another powerful.

Narhar Kurandkar, once remarked that a man's usefulness should end with his life.

He disagreed, his eyes show, his corpse educates.

My heart, turn into stone

Without food, without rags,
Without sense; without honour.
These souls they shiver,
Don't look! Sew your eyes!
Look not at the wretched lives;
Your nightmares haunt will they;
Breath in your lungs will choke I say,
Forget them, control alone,
My heart, turn into stone!

On it the creatures of the night,
On the path left and right.
In the darkness they're dancing;
Brandishing black teeth they're grinning;
They say, "Dare,
sell your soul, take your fare!
Man is zero, gold the hero;
Honour always, honour the hero,
Such hymns will frighten, yet,
Heart! turn into stone, don't regret.

The crumbs of injustice will rise,
Turn to ghosts these guys.
In to spikes will turn this gold,
Impale with it the entire fold.
Hear the hooves hear the thunder,
Today the red dust clouds yonder
Following rides the one,
The sculptor of this stone!
Such luck, such a lot
Turn to stone my heart!

Thanks Mr. Yogesh for your multiple comments on my various posts.

I will try replying to your comments as we go along.

Let me start with one here.

Nana Phadanvis was just like today's average politician. All he cared was self preservation at any cost. Read Vasudev Shastri Khare's biography of him.

Thanks for your careful reading of my posts.