Thank you Miraj for giving us Ordinary, Boring, Eventless Days

"...He in the end failed to establish harmonious dialogue among different communities. Where a Mahatma like him fails to achieve the objective, anyone shorter in stature can never succeed...Then Indian nationalism was infected by vindictiveness the way it is infected today..."

"TWO provinces of British India sealed the fate of India’s unity. One was the United Provinces, now Uttar Pradesh. The other was Assam. Both were ruled by the Congress. In both, the party rejected partnership with the Muslim League...

...The Congress rejected the very idea of grouping – the only concession to the League which had accepted the Plan – and wrecked it. Partition followed inevitably. That was the stand of the entire Congress. It was Gandhi who gave the lead. Others, Vallabhbhai Patel included, followed. Nehru alone cannot be blamed..."

I lived in Miraj मिरज for first twenty one years of my life. Miraj was good to us.

Sure I got bored of it towards the end of my stay there because at the age of 21, I did not appreciate what Arun Shourie has once said: "...So many things in my life-good things, as well as things that could have devastated many-have happened because of accidents. So I do not make long-term plans. In that respect, I have learnt something from the Buddha's teachings, from life, and from Anita, my wife. She has taught me that given the sort of things that can happen, we have to be content with, indeed thankful for, an ordinary, boring, eventless day."

Miraj had considerable Muslim population and although there were a couple of riots of other kinds, I never witnessed a single religious riot there.

We had Muslim teachers, Muslim friends, Muslim fruit and newspaper vendors, Muslim bus conductors, mother's Muslim glass-bangle vendor (कासार)...Urus in front of the dargah of Samsuddin Mira Saheb used to be bigger fun than Navratri and Ganesh Chaturthi. (By the way on Oct 1 2009, Wikipage on Miraj does not mention the dargah in the list of 'Religious places' at Miraj!)

But I never thanked Miraj for giving us many 'ordinary, boring, eventless' days.

In September 2009, Miraj was hit with religious violence that disrupted normal life of ordinary people for more than a week. The violence also spread to neighbouring Kolhapur especially Ichalkaranji.

"...Meanwhile, the Sangli police have launched a probe into the events that led to the violence which first broke out at Miraj on September 2...

...At the centre of this probe is the video CDs of the violence at Miraj. The CDs found there way on the internet as well as mobile photo clippings..."

"...Meanwhile, the man responsible for rioting, Vikas Suryavanshi, the city-chief of Shiv Sena is missing and police are searching for him." 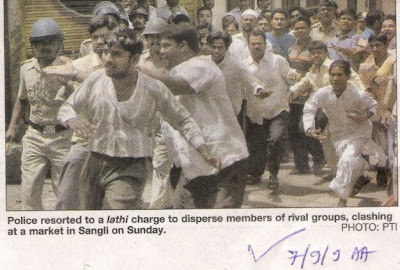