At Pokhran-II, did they swear or remember Bhagavad Gita?

"Towards the end of his life Oppenheimer turned against the Bhagavad Gita's philosophy of detachment, which had consoled him for so many years. 'If I cannot be comforted by Vishnu's argument to Arjuna,' he declared in a speech to the Congress of Cultural Freedom, 'it is because I am too much of a Jew, much too much a Christian, far too much an American. For I believe in the meaningfulness of human history, and of our role in it, and above all of our responsibility to it.' In effect, he was reaffirming the humanist creed he had imbibed at the Ethical Culture School. But it was the lack of substance of that creed that had led him to mysticism, and when he renounced detachment he must have known he had by then forfeited any chance of meaningful action." (November 2012)

Many Indians have a soft corner for J. Robert Oppenheimer because he knew Sanskrit! Maybe it's like having Indian-Americans in Obama team.

Oppenheimer supposedly thought: "Now, I am become Death, the destroyer of worlds." (verse 32, Chapter 11 of the Bhagavad Gita) after he saw the first nuclear explosion "Trinity" on July 16, 1945.

It reads in Sanskrit as follows: 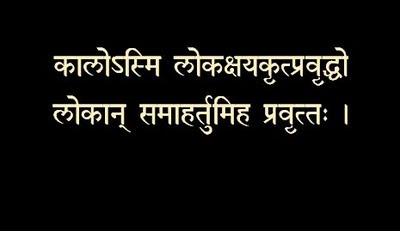 Did he say it?

“...According to a colleague, however, what he actually said was, ‘Now we’re all sons-of-bitches.’…”

K. Santhanam and Ashok Parthasarathi say in The Hindu on September 17 2009:

"Several inaccuracies in the claims made by BARC and in the articles published in the press, including The Hindu, on Pokhran-II need to be corrected. We have hard evidence on a purely factual basis, to inform the nation that not only was the yield of the second fusion (H-bomb) stage of the thermonuclear (TN) device tested in May 1998 was not only far below the design prediction made by the Bhabha Atomic Research Centre (BARC), but that it actually failed..."

So what happened at Pokhran-II?

If the test "failed", no one could have said either "Now we’re all Sons-of-Bitches" or "Kalo Asmi Loka-ksaya-krit Pravardho, Lokan Samartum iha Pravattah"!

But if this failure was hidden from the nation, aren't ordinary Indians entitled to say: "sons-of-bitches"?
Posted by Aniruddha G. Kulkarni at 9:00 AM

I couldn't get your email address, so writing this in a comment.

Actually, i was looking for Bhagvat Geeta copy with a good-quality Marathi translation. Could you pass on some names?

We can continue to use posts to exchange info.

The best translation remains Gitai by Vinoba Bhave but I don't find it on the market.

Will update if I find any.

I think you are being unfair when you say that many Indians have a soft corner for Oppenheimer just because he knew Sanskrit. There are many other reasons to like the great man and I trust the ones well-read enough to know that he knew Sanskrit to also know his other qualities. Respecting Oppenheimer is definitely not analogous to feeling proud of Indian Americans in the Obama team.

There are probably number of Indians who like JRO. "Many" of them for Sanskrit...and many of them for his other qualities...

who cares about oppenhimer guy?

I find this all very interesting , so thank you .

My one question i have is , can you say with 100% confidence that the Sanskrit translation at the top of the page is of " now , i am become death , the destroyer of worlds . " this is very important to me .

The first line is:

This is best I could do. I am sure this can be improved upon by experts many times over.