Indian Psychiatric Society, Western Zonal Branch is organizing their 40th annual conference on October 9th, 10th and 11th 2009 at Nanded, Maharashtra. The theme of the conference is Women’s Mental Health.

A novel feature of the conference is the exhibition of cartoons- on the subject of mental health- by artists around the world.

Creative writer and a renowned critic of the art of cartooning, Madhukar Dharmapurikar मधुकर धर्मापुरीकर, is in-charge of the exhibition.

Dharmapurikar has created a booklet, for private circulation, ‘Delight in Madness’, that contains all the cartoons that will be exhibited…and more.

The booklet says: Insanity destroys reason, but not wit. Dharmapurikar proves it. He has gone in his usual possessed (insane?) ways to create these 66 pages that celebrate insanity on every single page!

It's said Ludwig Wittgenstein's intellectual brilliance and erratic behaviour provided Bertrand Russell with an opportunity to meditate on the link between logic and madness.

The same 'mad' Wittgenstein has said: 'The way to solve the problem you see in life is to live in a way that makes the problem disappear.'

The participants of the conference (and their patients!) will realise that their problems have disappeared, albeit briefly, when they read this book.

They say: good is the enemy of great. Dharmapurikar is never happy with just ‘good’. He wants perfection not only in his ideas but their execution. His last book, ‘Reshalekhak: Vasant Sarwate’ (a compilation of Vasant Sarwate’s cartoons from the defunct weekly ‘Manoos’ माणूस), is a testimony to that. This book is an encore.

Psychotherapist and essayist Adam Phillips says he hates the 'intrusiveness' of psychoanalysis, that 'most people are essentially private and the demand to articulate oneself is quite often a strain, and, in the process, can be a diminishment.

At the bottom of this post see a picture from the booklet.

Poor peahen already feels so diminished before she even has opened her mouth.

This indeed is the mascot image of the conference whose theme is : Women’s Mental Health!

Adam Phillips also says: “I don't have theories, I have sentences. I don't want people to come away thinking, this is what Phillips thinks about X or Y. My wish is not to inform people, but to evoke things in them by the way the writing works. That, I value. Ideally, I want the books to return you to your own thoughts.”

If so, ‘Delight in Madness’ will not disappoint in your journey of returning to your own thoughts. 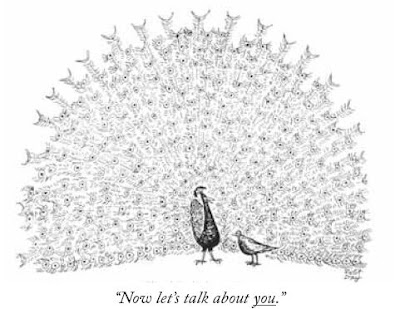