Government of Maharashtra plans to erect 300-feet high statue of Shivaji Maharaj in the Arabian Sea, facing the Marine Drive, in south Mumbai.

Never mind neglect of existing world-class monuments in Mumbai itself: cave temples of Jogeshwari and Mandapeshwar, not to mention sorry state of countless forts and other historical places in Maharashtra.

Read more on this in the essay published by Frontline July 31, 2009 here.

I came across this beautiful line from Thana Gazette (written by a Brit?) in the said essay: “Kanheri is the only rock-cut monastery in western India that has the feeling of having been, and of being ready again to be, a pleasant and popular dwelling place."

...Sir, you may check in because your room is ready...For last hundreds of years!

If we inherit a place like this, shouldn't we be leaving one behind? Isn't that in our contract with our grandchildren?

Remember, the Jogeshwari caves, the Brahminical caves belonging to A.D. 520-550, are the first rock-cut cave temples built by Hindus in the country.

But we are happy chanting: Garv se kaho hum Hindu hai!!! (Say with pride we are Hindus)

When people don't preserve their own glorious heritage, how can we expect them to import great books from other cultures?

Recently on Guardian's website, I found "The top 100 books of all time"
I have not read majority of them but I wondered how many of them have been translated in Marathi.

For someone like me, translation was important because most books from the list, I read first time, were in Marathi. For example, I have read a number of Stefan Zweig's books in Marathi because my father Gopal Dutt Kulkarni गोपाळ दत्त कुलकर्णी had translated them from English.

Translation of great books in a language enriches it. In Marathi, Sane-guruji साने-गुरुजी, who himself translated many books from foreign and other Indian languages, sought such enrichment.

Read a related post that appeared on this blog earlier.

As per my knowledge only following books from the top 100 have been translated in Marathi.

And for criminal neglect of our heritage as depicted in the picture below? Negative marks! 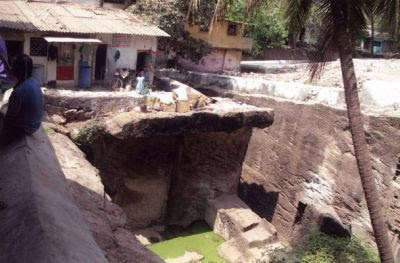 Seepage and water stagnation at the Jogeshwari caves