Driving us Crazy after Thousands of Years

Was Alam Ara, India's first sound film, ever made? Or is it pure fiction?

Future historians are likely to conclude that it was never made because prints of it are not available with the National Archives of India, as per Information and Broadcasting official.

That's the reason all non-Brahmin, Marathi-speaking historians are asking the government of Maharashtra to remove every reference to Dadoji Konddeo Konddev, a Brahmin ब्राह्मण as a teacher of Shivaji.

I am always deeply moved by what following passage claims:

“…Perhaps the most remarkable aspect of ancient Indian history is the humility of rulers. Even a king whose territories were as vast as Asoka's (304 BCE – 232 BCE), covering practically all of the subcontinent, hardly, even in his numerous edicts and inscriptions, mentions his own name. He is just described as “devanampiya piyadassi”, “beloved of the divine” and “one whose vision is filled with adoration”. This is not a title he had given himself; it is a term used for his father, his grandfather, other Indian kings and even for kings beyond Indian shores.

This is the same period of time when a thousand years of art does not have one portrait of a king, in sculpture or painting. The only exception was the period of the Kushanas, who hailed from southern China. They had portraits made of themselves in the 1st century A.D. After them, Indian art reverted to its traditions and the first portrait to come was 700 years later, in the time of the Pallavas, at Mamallapuram…”

But can we trust even a so-called 'proof'?! 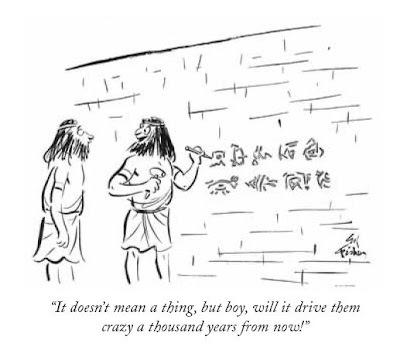 My caption to the cartoon above:

"I just carved- Chanakya, a Brahmin, was never a teacher of Chandragupta Maurya. This will drive them crazy in distant future."
Posted by Aniruddha G. Kulkarni at 9:00 AM