Vinod Mehta has called IPL and/or its auction of cricketers “the rape of cricket”. (Outlook March 10, 2008).

“…The BCCI is a destructive body determined to kill cricket. If anyone is planning a coup d’etat against it, count me in. The present lot must be removed before they inflict further damage. Meanwhile, all cricket lovers must hope the IPL is a complete and total flop. And the people who conjured up this dreadful scheme are badly burned.”

National leaders of all hue from Gurudas Dasgupta to Bal Thackeray via Sharad Yadav have already lambasted IPL, some of them calling for its ban.

I disagree with all of them as far as IPL is concerned.

While growing up, I played and watched gulli sports from kabaddi to cricket and I strongly feel that people should get an opportunity to play/participate in a sport locally. And those who do should make reasonable living out of the same.

Fan like me should get an opportunity to see a sporting action on a local ground and not just on TV. I have always enjoyed watching a gulli game far more than the one on TV.

IPL and ICL are those opportunities.

Many people have called auction of the players vulgar.

If it’s so, most other things should also be called vulgar: Highly educated people changing three jobs in two days for more money, film stars charging obscene money to inaugurate shops, TV serials propagating pseudosciences, citizens changing nationality like soiled clothes, goons lynching poor labourers because they don’t speak a particular language, society at large that holds the poor criminally responsible for their position, news media that will catastrophize anything they can, people that worry about their own children but don’t feel hurt or pained when they see others’ children exploited or treated badly…

I feel IPL is likely to give huge opportunity to young people from weaker sections of Indian society to make it big. It is a promising tool to promote social mobility in India. Today BCCI may be controlling this localization of Indian cricket but tomorrow may throw a lot of surprises at it.

If a boy enjoys his cricket, is prepared to work hard for it, cannot afford expensive higher education, with a bit of luck, he needn’t study his textbooks.

Therefore, following picture is no exaggeration. 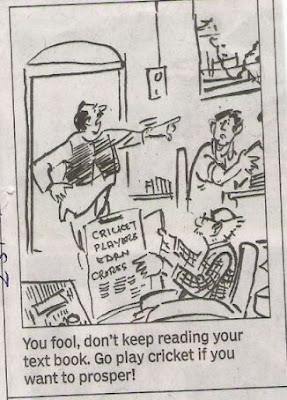 Hi!
I am happy to locate your thrilling blog. But I have some queries. How to communicate with you other than this site? Do you have any e-mail id? If I have to send you some info, how and on what basis? Pl reply without any misunderstanding, since I am trying this medium for the first time. You may advise me also.
Vibhakar

What a decline of culture of education and sacrifice in the land of Bharat? Aniruddha, your thoughts on Vinod mehta's provocative article are most appropriate for your, I repeat, your present generation of yielding maximum money wherever one can squiz using his wit and power. Sarve sukheenahaa santu!

You have already communicated with me.

You may continue to use the same channel to respond.

Is that not a little too simplistic?

I live with working class people, how would you react (with your IIM - A background), to factories in Maharashtra setting up hostels on their premises, and not a single Marathi speaking person living there? (I can share photographs and other details)

Oh! I am still there, I see that elsewhere you too have quoted Shejwalkar (Just as I have at another place on this blog) on those who appropriated the right to decide our country's destiny but did not take lessons from its history.

There is nothing simplistic about language jingoism in today's Maharashtra.

I feel ashamed of it.

I don't know why we should care if there is any Marathi speaking person or not.

I am not from IIM-A.

I'm sorry I my mistake, I read someone describing himself as IIT, and IIM - A, and I was reading your blog, mixed things up. You still have'nt answered the question. Please do so.

Q: "Is that not a little too simplistic?"

Q: "how would you react (with your IIM - A background), to factories in Maharashtra setting up hostels on their premises, and not a single Marathi speaking person living there?"

Answer: I would not react at all unless some injustice has been done in the process of recruitment or some agreement has been broken.

And while I argue my case, I would not bring in the language issue.

I would say I am more qualified than the guy you have taken in. I would use peaceful means like Sane Guruji and will not resort to foul language and violence.

"Yes being a Marathi speaking local is the strongest possible disqualification.

"My mother tongue is my greatest liablity.

I have already said what I had to say.