Did a Power More than Human Give Letters their Shape? Answer it R K Joshi र कृ जोशी

Now he won't because R K Joshi who made pioneering efforts to establish aesthetics of Indian letterforms and revived academic, professional and research interest in Indian Calligraphy died on February 5, 2008.

Read wonderful tribute put together by C-DAC in Marathi on him here.

When I was in school (1965-1975), elders often talked about the quality of “hand-writing”, both Marathi and English. I thought I was doing OK with both.

My father disagreed. He said my letters were short unlike my brother and hence my handwriting was not pretty. He was right.

Later when I corresponded with D G Godse द ग गोडसे, he once wrote that my handwriting was good. He for sure was encouraging me. I have never liked my handwriting.

But I have admired it of many. Particularly Marathi ones.

Hindustan Times claimed that R K Joshi “brought about the realisation that alphabet can have aesthetic value”. That obviously is very sloppy. The realisation had been there for much longer.

I liked Joshi's Marathi initials more. कृ (Kru) there stood out like a peacock, between mundane र(R) and जोशी(Joshi), full of possibilities. When you pronounced his name, there was an echo to it.

He was a scholar in the tradition of V K Rajwade वि का राजवाडे. Ready to put in any amount of effort to get slightly closer to the truth. In fact he showed us a whole new way to approach the truth: Calligraphy.

In Japan, ancient samurai swords and calligraphy both are national treasures. In India, we have even stopped talking about the quality of handwriting.

Vasant Sarwate वसंत सरवटे had some fun with our alphabets. Here is an example. 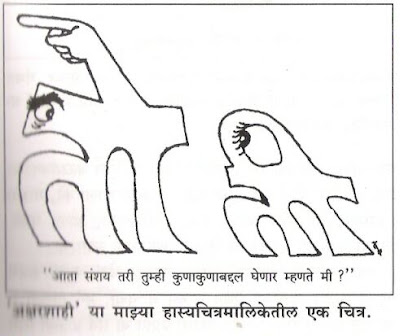 My Dear Aniruddha,
How come you did not find any creation of great Ra.Kru. Joshi to accompany the blog written in his memory? Dear friend,it would have been more appropriate. I would request you to apend such one.
Waman Karnik, Boston

I didn't find one of my liking at the time of writing.