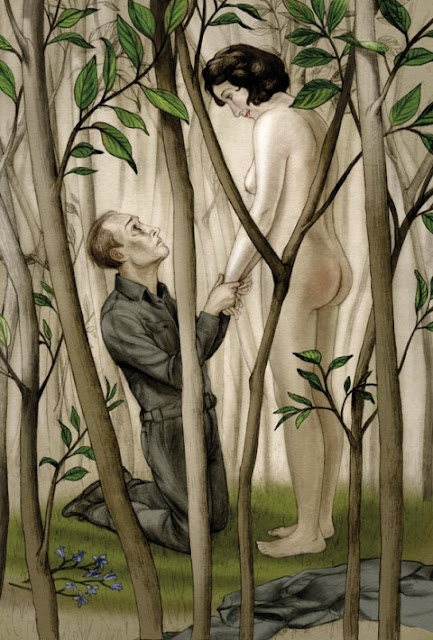 'He knelt down before her and took her hands in his'


"...Quickly, with an occasional crackle of twigs, they threaded their way back to the clearing. When they were once inside the ring of saplings she turned and faced him. They were both breathing fast, but the smile had reappeared round the corners of her mouth. She stood looking at him for an instant, then felt at the zipper of her overalls. And, yes! it was almost as in his dream. Almost as swiftly as he had imagined it, she had torn her clothes off, and when she flung them aside it was with that same magnificent gesture by which a whole civilization seemed to be annihilated. Her body gleamed white in the sun. But for a moment he did not look at her body; his eyes were anchored by the freckled face with its faint, bold smile. He knelt down before her and took her hands in his.
"Have you done this before?"
"Of course. Hundreds of times—well, scores of times, anyway."
"With Party members?"
"Yes, always with Party members."
"With members of the Inner Party?"
"Not with those swine, no. But there's plenty that would if they got half a chance. They're not so holy as they make out."
His heart leapt. Scores of times she had done it; he wished it had been hundreds—thousands. Anything that hinted at corruption always filled him with a wild hope. Who knew? Perhaps the Party was rotten under the surface, its cult of strenuousness and self-denial simply a sham concealing iniquity. If he could have infected the whole lot of them with leprosy or syphilis, how gladly he would have done so! Anything to rot, to weaken, to undermine! He pulled her down so that they were kneeling face to face.
"Listen. The more men you've had, the more I love you. Do you understand that?"
"Yes, perfectly."
"I hate purity, I hate goodness! I don't want any virtue to exist anywhere. I want everyone to be corrupt to the bones."
"Well then, I ought to suit you, dear. I'm corrupt to the bones."
"You like doing this? I don't mean simply me; I mean the thing in itself?"
"I adore it."
That was above all what he wanted to hear. Not merely the love of one person, but the animal instinct, the simple undifferentiated desire: that was the force that would tear the Party to pieces. He pressed her down upon the grass, among the fallen bluebells. This time there was no difficulty. Presently the rising and falling of their breasts slowed to normal speed, and in a sort of pleasant helplessness they fell apart. The sun seemed to have grown hotter. They were both sleepy. He reached out for the discarded overalls and pulled them partly over her. Almost immediately they fell asleep and slept for about half an hour.

Winston woke first. He sat up and watched the freckled face, still peacefully asleep, pillowed on the palm of her hand. Except for her mouth, you could not call her beautiful. There was a line or two round the eyes, if you looked closely. The short dark hair was extraordinarily thick and soft. It occurred to him that he still did not know her surname or where she lived.
The young, strong body, now helpless in sleep, awoke in him a pitying, protecting feeling. But the mindless tenderness that he had felt under the hazel tree, while the thrush was singing, had not quite come back. He pulled the overalls aside and studied her smooth white flank. In the old days, he thought, a man looked at a girl's body and saw that it was desirable, and that was the end of the story. But you could not have pure love or pure lust nowadays. No emotion was pure, because everything was mixed up with fear and hatred. Their embrace had been a battle, the climax a victory. It was a blow struck against the Party. It was a political act...."


“...At any rate, spring is here, even in London N. 1, and they can’t stop you enjoying it. This is a satisfying reflection. How many a time have I stood watching the toads mating, or a pair of hares having a boxing match in the young corn, and thought of all the important persons who would stop me enjoying this if they could. But luckily they can’t. So long as you are not actually ill, hungry, frightened or immured in a prison or a holiday camp, spring is still spring. The atom bombs are piling up in the factories, the police are prowling through the cities, the lies are streaming from the loudspeakers, but the earth is still going round the sun, and neither the dictators nor the bureaucrats, deeply as they disapprove of the process, are able to prevent it...”
(‘Some Thoughts on the Common Toad’, 1946)
Posted by Aniruddha G. Kulkarni at 9:00 AM