Did India Send the Yak to China After a Threat of Shower of Strontium 90?..:Cartoonist Carl Giles@100


Wikipedia informs that "In April 2000, Mr. Giles was voted 'Britain's Favorite Cartoonist of the 20th Century'".

Mr. Giles has drawn hundreds of cartoons. I have seen and liked dozens of them. Here are two of them that made me laugh my head off...

On India China border dispute over which a war was already fought...just take in all the details....


...yak, boy, bed of spikes, snake charmer, Chinese soldier standing in attention, another pointing gun at snake...pettiness of war (atomic one, over a yak)...Chinese military officer being driven in a man pulled cart....bellicose language ...Himalayas... 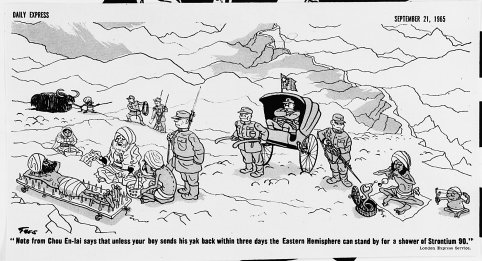 "Note from Chou En-lai says that unless your boy sends his yak back within three days the Eastern Hemisphere can stand by for a shower of Strontium 90."

(Strontium 90: it is a radioactive isotope of strontium produced by nuclear fission. China had tested the first atomic bomb in 1964.) 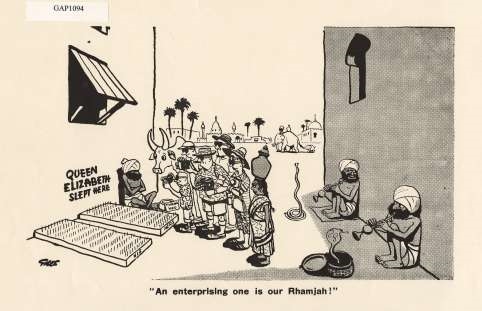 "An enterprising one is our Rhamjah!"

There is no tourist, indeed even a cow, interested in watching a snake charmer or the Indian rope trick....notice the cow alongside the tourists...so many pictures of the late R K Laxman too feature such cows....and don't I remember Rhamjah like enterprising peddlers from my childhood at Miraj? I have spent hours watching them...

Both pictures courtesy of: The British Cartoon Archive hosted by University of Kent

p.s. After I published this post, I read the following in The Times of India September 29 2016: