Gathering in Circles Around the Glimmering Lights of GA's Epigraphs

"No, No, Why further should we roam
Since every road man Journeys by,
Ends on a hillside far from Home
Under an alien sky"

I still remember the December 12 1987's eerie morning  at Nashik (नाशिक) when I heard about GA's death on the All India Radio.

After reading GA's numerous letters, particularly about his final years,  and knowing full well that such decisions are very complex, I still wonder if he should have stayed back in his beloved Dharwad instead of moving to alien Pune (पुणे). When I went to Agra in 1980's,  I was most moved by the place they show where  dethroned Emperor Shah Jahan used to sit and stare at The Taj Mahal in the distance as he lay dying.


I was at 'G A Kulkarni road' in Pune, a few months ago, to attend an engagement ceremony, in a makeshift hall, in a multistory building's basement, and how grotesque it sounded that that piece of Pune- complete with a Pizza Hut- and not some Greek Colosseum or a stretch of beach at Mahabalipuram-  is named after GA!  Indeed, the world ends not with a bang but a whimper.


Although I have bought it some time ago, like majority of  my books, I have still not read  Cervantes's 'Don Quixote'.

Yatrik  has these lines:

("...hey, instead of creating changing metaphors for stupid, gross world, if the world starts changing to suit your metaphors, tell me what more you want.")

"New book cover designs for the Observer 100 greatest novels of all time list – in pictures:

Belgian artist Tom Haentjens has united 100 artists from 28 countries in a co-creation project, Doedemee to help raise awareness of illiteracy in Africa. Each has redesigned a poster-sized cover for a book from the list compiled by Robert McCrum in 2003..."

What  pleasure those designs gave!

I was captivated particularly by this:

Now doesn't it represent: Wold Starts Changing to Suit His Metaphor...?   I feel it does.

They say GA was a good painter. I can't vouch for that. But being a voracious reader, I wonder if he ever saw Roc Riera Rojas illustrated special edition of  Don Quixote.

After seeing the picture below from that edition, I re-read GA's story and imagined dialogues between Don and Sancho spoken by the figures below.

It was a lot of fun. 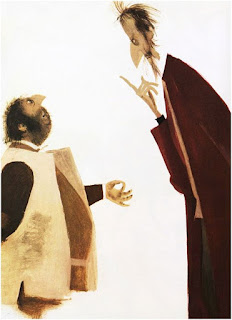 GA was a master of epigraphs. His books would not be complete without the epigraphs he chose for them. (I wonder why  he didn't also choose images to go along.)

"Epigraphs escort us safely across the boundary between the title page and the story. Easing us into narrative, epigraphs make us pause and notice the transition from the world to the work, from life to the novel. They slow us down—which is why we often skip them."

You do not know
The unspoken voice of sorrow in the ancient bedroom
At three o'clock in the morning.
- T. S Eliot

'Shallow people demand variety - but I have been
writing the same story throughout my life, every
time trying to cut nearer the aching nerve.
- Strindberg

I have reproduced them very close to as they appear in the book.

Each story from GA's book is nicely set up with these epigraphs...they indeed transition us from 'the world to the work, from life to the novel. They slow us down' —but I never skip them! I might skip his book!

"The Art of the Epigraph’s epigraph, drawn from Virginia Woolf’s A Room of One’s Own, says that books “continue each other in spite of our habit of judging them separately.” This is true—but it might not be the whole truth. For though we like to imagine the autonomy of a world of books that speak to one another, separate from our own fallible judgments and best guesses and wishful thinking, it may be that all we have are groups of readers, gathering in circles around the glimmering lights of our authors’ epigraphs, building literature together one line at a time."

GA probably would have loved this conclusion...'groups of readers, gathering in circles around the glimmering lights of our authors’ epigraphs, building literature together one line at a time.'
Posted by Aniruddha G. Kulkarni at 9:00 AM

Have you seen Blood Diamond? While the movie is pretty terrifying from the start, the scene where Leonardo Di Caprio dies under an alien sky is the one that makes it difficult for me to breathe. See it here http://www.youtube.com/watch?v=K4AI5CpoiI4

Also, another death that I have come across in a book - which haunts me and scares me is that of Ammu, Arundhati Roy's Ammu from the God of Small Things. Ammu too dies alone under an alien sky - under an alien ceiling to be precise "with a noisy fan for company".

I haven't seen the movie but may not see it it's "terrifying from the start".

Yes I had read about Ammu's death from you.

Alien sky is something I am always afraid of. I have been under a few. Another such deaths that haunt me are of many Maratha soldiers at Panipat on Sankrati day in 1761.