हागला! Will we ever see India's El Caganer Diwali Figures?

Evelyn Waugh:
“Beware of seriousness: it is a form of stupidity”

CAMILLE PAGLIA:"As respectability became the central middle-class value, censorship and repression became the norm. Victorian prudery ended the humorous sexual candor of both men and women during the agrarian era, a ribaldry chronicled from Shakespeare’s plays to the 18th-century novel."

Wikipedia:"Jonathan Swift, an Irish satirist in the 17th century, used scatological humor in some of his pieces, including his famous essay A Modest Proposal and his rather crude poem "The Lady's Dressing Room," in which the speaker comments on the goings-on in a 17th-century woman's room, including her business in her chamber pot."

'Shit' is now as much an Indian language expression as say "aayla" (आयला) in Marathi is. I often use both 'shit' and 'aayla'- or its more intense version 'chyala' (च्यायला).

(According to Wikipedia, shit 'As a slang term, it has many meanings, including: nonsense, foolishness, something of little value or quality, trivial and usually boastful or inaccurate talk, or a contemptible person. It may also be used as an expression of annoyance, surprise, or anger, and has other usages as well.')

These days I also hear quite a bit of "haagla" (हागला) "pooped" in  Marathi conversations of young crowd. (For instance if a batsman in cricket got out in a stupid manner, he 'pooped'!)

It says "A caganer -- or "pooper" -- is a small figurine of a person squatting down with lowered pants (or raised skirt) to answer nature's call. The original "El Caganer" is a wooden or clay figure of a peasant wearing the traditional floppy red Catalan cap with a black band ("barretina") and smoking a cigarette or a pipe." 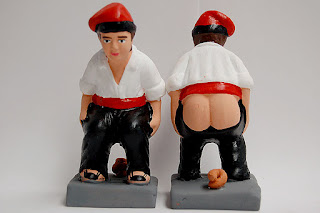 I laughed my head off and thought: Will we ever see such figures depicting India's prominent personalities? After all Samvat 2068 has been one of the most depressing for Indian nation. (watch former Chief Justice of India J S Verma's interview dated October 28 2012 here.)

I will probably never see such Indian figures but I can well imagine them...from business, politics, media, judiciary, culture, sports etc...There is so far no "thought-censorship" in India.

Btw- there is just one Indian public personality, I guess, who wouldn't mind such a 'caganer' depiction: Khushwant Singh...A true broad minded liberal...