"What we are now living through is an intense, but narrow, set of innovations in one important area of technology. Does it matter? Yes. We can, after all, see that a decade or two from now every human being will have access to all of the world’s information. But the view that overall innovation is now slower than a century ago is compelling."


J G Ballard:
"The only truly alien planet is Earth."

John Horgan:
"...How can we justify costly missions in space when so many people here on earth lack adequate health care, housing, education and other necessities? Given all our terrestrial troubles, our infatuation with space seems more than ever like escapism..."

If you pay attention to the dialogues of Hindi/ Marathi films from 1960's, you often hear about the prospect of man going to the moon.

I guess it started with US President John F. Kennedy's- who was quite ubiquitous even in India- speech dated May 25, 1961 :

"I believe that this nation should commit itself to achieving the goal, before this decade is out, of landing a man on the moon and returning him safely to the Earth."

After July 20, 1969, the dialogue changed to man's historic achievement..."We have gone to the moon...what next" etc.

For instance, a line in this Rajesh Khanna/Kishore Kumar/Laxmikant-Pyarelal/Anand Bakshi song from 'Aan Milo Sajna', 1970 reads:

"teri nazar to chaand taaron pe aaj hai" (your sight today is on the moon and the stars.) 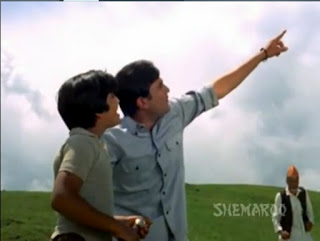 Last 43 years have been a kind of letdown.

David Graeber writes in "The Baffler" No. 19

"A secret question hovers over us, a sense of disappointment, a broken promise we were given as children about what our adult world was supposed to be like. I am referring not to the standard false promises that children are always given (about how the world is fair, or how those who work hard shall be rewarded), but to a particular generational promise—given to those who were children in the fifties, sixties, seventies, or eighties—one that was never quite articulated as a promise but rather as a set of assumptions about what our adult world would be like. And since it was never quite promised, now that it has failed to come true, we’re left confused: indignant, but at the same time, embarrassed at our own indignation, ashamed we were ever so silly to believe our elders to begin with.

Where, in short, are the flying cars? Where are the force fields, tractor beams, teleportation pods, antigravity sleds, tricorders, immortality drugs, colonies on Mars, and all the other technological wonders any child growing up in the mid-to-late twentieth century assumed would exist by now? Even those inventions that seemed ready to emerge—like cloning or cryogenics—ended up betraying their lofty promises. What happened to them?

We are well informed of the wonders of computers, as if this is some sort of unanticipated compensation, but, in fact, we haven’t moved even computing to the point of progress that people in the fifties expected we’d have reached by now. We don’t have computers we can have an interesting conversation with, or robots that can walk our dogs or take our clothes to the Laundromat.

As someone who was eight years old at the time of the Apollo moon landing, I remember calculating that I would be thirty-nine in the magic year 2000 and wondering what the world would be like. Did I expect I would be living in such a world of wonders? Of course. Everyone did. Do I feel cheated now? It seemed unlikely that I’d live to see all the things I was reading about in science fiction, but it never occurred to me that I wouldn’t see any of them." 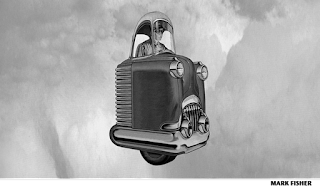 What about the future as we see it today...where are we going?

"Short of a scientific miracle of the kind that has never occurred, our future history for millenniums will be played out on Earth and in the “near space” environment of the other seven planets, their moons and the asteroids in between. For all our flights of imagination, we have yet to absorb this reality. Like it or not, we are probably trapped in our solar system for a long, long time. We had better start coming to terms with what that means for the human future...

...The truth is we propel ourselves into space using much the same physics as the Chinese played with when they discovered what we came to call gunpowder more than 1,400 years ago. Blowing stuff up under us is just about the only way we know how to travel through the void.

But what we’ve learned in doing so brings me, as an adult and as an astrophysicist, to the hardest and most inconvenient truth of all। While our children’s children’s great-grandchildren will live with ever more powerful technology, they will also live ever more intimately with ever more billions of others in this, our corner of the cosmos. Looking back and forward, my bets are now on that same human genius, ambition and hope to rise to the occasion. We will have no other choice. There will be nowhere else to go for a very long time."

But why should we despair?

Taking in droplets of water, poet B S Mardhekar (बा सी मर्ढेकर) stood on the banks of the majestic Ganges in Patna, Bihar and told his God:

(You stay where you are,
for me sprinkling here will do !)

I am content with the light reaching me from the moon and the stars.
Posted by Aniruddha G. Kulkarni at 8:48 AM