'Failed to Provide Me with a Male Heir' Still Works

T S Eliot:...you do not knowThe unspoken voice of sorrow in the ancient bedroomAt three o'clock in the morning. I am not speakingOf my own experience, but trying to give youComparisons in a more familiar medium...
As sex-ratio (F/M) tumbles in so called prosperous parts of India, a woman in even a modern Indian bedroom is well versed with this: You have failed to provide me with a male heir.

Like her previous 'Wolf Hall', Hilary Mantel's 'Bring Up the Bodies' has received rave reviews. (I have bought both the novels but not read them.)

"The sequel to Hilary Mantel's 2009 Man Booker Prize winner and New York Times bestseller, Wolf Hall delves into the heart of Tudor history with the downfall of Anne Boleyn

Though he battled for seven years to marry her, Henry is disenchanted with Anne Boleyn. She has failed to give him a son..."...a male heir.

Now only a very brilliant mind can come up with a cartoon projecting 16th century's monarchy of Henry VIII onto the institution of marriage, now inclusive of same-sex variety, of 21st century.

"...“What if . . . there is some flaw in my marriage to Anne, some impediment, something displeasing to Almighty God?” Henry wonders. Cromwell reflects that he has heard those words before, about a different woman. History repeats as farce, and the reader comes face to face with the Henry VIII of Eleanor and Herbert Farjeon’s funny poem, once quite familiar in British classrooms:

Bluff King Hal was full of beans;
He married half a dozen queens. . . .
The first he asked to share his reign
Was Kate of Aragon, straight from Spain—
But when his love for her was spent,
He got a divorce, and out she went.
Anne Boleyn was his second wife;
He swore to cherish her all his life—
But seeing a third he wished instead,
He chopped off poor Anne Boleyn’s head.

...“Bring Up the Bodies” fills its final pages with their trial and execution. After them comes Anne Boleyn, kneeling and blindfolded, as the executioner approaches from behind with his sword: “There is a groan, one single sound from the whole crowd. Then a silence, and into that silence, a sharp sigh or a sound like a whistle through a keyhole: the body exsanguinates, and its flat little presence becomes a puddle of gore.”..." 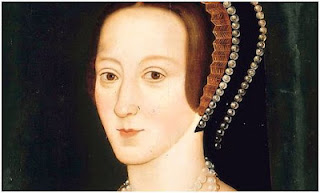 Go back to the cartoon above. Kanin's disenchanted Henry looks and sounds so sincere. (I would name Henry's partner Thomas instead of Richard.)

Today mercifully most marriages don't end with a beheading but the reason for parting ways can be more 'lame' than that of any past monarch. To paraphrase Woody Allen: The heart DOES NOT want what it DOES NOT want.

Zachary Kanin is probably the finest cartoonist of the present times.