Have Marathas been Generous Enough towards their Bhimthadi Ponies?

"It is impossible for a man of average sensibility to observe closely and to note the painful expression and the intelligence of these creatures … to witness their sufferings [and] the brutal treatment which they too often meet from ignorant and cruel men; it is impossible for him to see these things without sorrow, without endeavouring to alleviate their agony …"

Many Marathi speaking people feel proud about the military success of Marathas across the subcontinent in 18th century.

Many legends, heroes and myths are borne out of that pride.

A good part of that success was surely due to their mount- a pony aka Bhimthadi-Tatta(भीमथडी तट्टं).

I have read a few books describing that period but have never come across the praise for their horses as much as following.

Reviewing "Russia Against Napoleon" by Dominic Lieven that analyses one of the greatest military triumph in history, JENNIFER SIEGEL says:

"...Russia's triumph is also a story of logistics, supplies and, above all, the horse.

The country's leaders mobilized what Mr. Lieven calls "the sinews of Russian power": its vast population (although much smaller than the combined numbers at Napoleon's disposal); its outstanding and plentiful horse stock; its arms manufacturing; and even the sometimes unstable Russian economy.

Of these, it is the horse, and Russia's ability to mobilize its light cavalry to harass Napoleon's rearguard as it retreated across the great European plain, that receives the greatest attention in "Russia Against Napoleon." Coming in a close second to the horse in significance were the victuallers who managed to feed and supply more than a half-million troops during the two-year campaign..." (WSJ, APRIL 14, 2010) 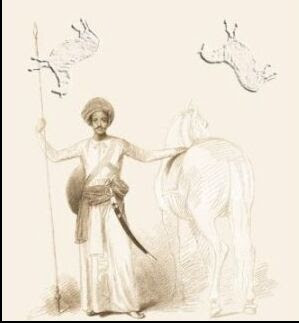 You are right; Maharahstrians should be proud of their Maratha-period history, and of the Bhimthadi horses.

But interest in this is low in modern Pune, where I have lived 1958-61, 1981-84, and 2004-07 (including living in a village in Purandar Taluka, near Sasvad). I speak Bengali, Hindi, Nepali, Punjabi, and Marwari, am a ex-rider and a life-long horse-lover. I have ridden Maharashtrian 'deshi' ponies as a boy.

Most of our popular history is "hero" centric. There are hardly ordinary people there let alone ponies.

Thanks, for giving valuable data on Bhimthadee (bhimanadicha teer (shabdkosh P N johi Page 894) Tattoo. The word was used in 4Th Std History book in lesson on Shayistakhan. And therefore i tried to search meaning (in vain)The explanation that bhima Nadee's (and other rivers like Krishna, Nira, Ghodnadi )water being the cause for good breed does not seem that convincing. Any new data please. Suneel Karve (Email suneelkarve@gmail.com )

Thanks, for giving valuable data on Bhimthadee (bhimanadicha teer (shabdkosh P N johi Page 894) Tattoo. The word was used in 4Th Std History book in lesson on Shayistakhan. And therefore i tried to search meaning (in vain)The explanation that bhima Nadee's (and other rivers like Krishna, Nira, Ghodnadi )water being the cause for good breed does not seem that convincing. Any new data please.

Thanks Suneel Karve. I have no new data.

btw- I am convinced by water argument.

It was often said that even for human beings a particular water suited and some other did not.

Thanks for the valuable information. I am an ardent horse lover and I feel proud of our own breed. Since one is a horse lover, all breeds should hold equal respect, however, at the same time, without disrespecting others, we still can show love and affection to our own, right :)

Are there any bhimthadi ponies left until today ? The Google also not showing any results