C. P. Cavafy: "I’d rather look at things than speak about them."

Tom Wolfe: "The first line of the doctors’ Hippocratic oath is ‘First, do no harm.’ And I think for the writers it would be: ‘First, entertain.’"

A Compliment that Marie might have received from Pierre!

When I read Kiran Karnik's article in the The Times of India on Nov 10 2011, it was hard to believe that Indian government of the day was almost toppled in the name of U.S.–India Civil Nuclear Agreement in year 2008:

"Despite repeating 'Open Sesame' many times over for three years, the door that was to usher us into the nuclear club remains tightly shut. No genie to grant our wishes magically appears even after endless rubbing of the lamp. Were we taken for a ride and sold a dud lamp?...There is now a sea change in the global nuclear scenario. Following the tsunami-induced problems in Fukushima, there is worldwide concern about nuclear safety......It is now clear that the benefits of signing the nuclear deal no longer exist and the gains are, at best, minimal. Yet, the cost - especially in terms of strategic space and manoeuvrability - remains high..."

And the subject of 'nuclear' led me to tragic Curie family. And Marie in particular.

Google honoured Ms. Curie with following doodle on the occasion:

To Einstein, she was 'as cold as a herring'; much of the French scientific establishment detested her; and she was reviled for her 'wanton' antics. Yet Marie Curie was also a loyal wife, a distraught widow, a passionate lover, and a patriot. For good measure, she won two Nobel Prizes...

...In the end, however, Marie was done down by her offspring. Radium - 'her child', as she called the element that she kept by her bed to watch its baleful glow - had battered her body with its emanations for more than 30 years. At 66, her fingers were blackened and cracked; she was nearly blind; suffered from tinnitus; was plagued by headaches and on 3 July 1934 died of aplastic pernicious anaemia, doubtless caused by radium radiation.

Hndsight is the bane of biography. Feminism is one of the most distorting of lenses. To see Marie Curie forced to sit among the audience in Stockholm while her husband, Pierre, gave the lecture following their joint receipt of the Nobel Prize in 1903 is infuriating.

If Marie was treated like this what chance my great-grandmothers stood in year 1903?

Or even Dr. Anandi Gopal Joshi (आनंदी गोपाळ जोशी), the first Indian woman- along with Kadambini Ganguly- to obtain a medical degree through training in Western medicine, did in year 1886.

And here is an artist's imagination of a compliment Ms. Curie might have received one of those days: 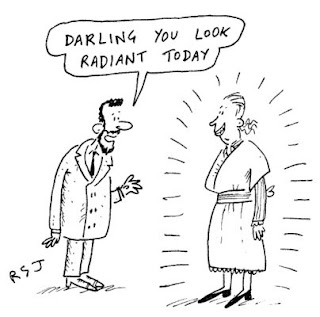 Nice one on Curie. But the single most provocative example of gender bias in Europe [in my opinion] was cited by Jayant Narlikar. He says that in Cambridge till the end of WW 2, women werent awarded degrees but instead were given a certificate that they are fit to receive degree!!!

About Anandi bai joshi, I remember reading somewhere (most likely by Ahitagni Rajwade) that her husband was determined to make her 'great woman', so to speak and sent her abroad against her will.

Thanks Nikhil aka John Nash!

Anandi-bai's story is very complex and frankly- after so many attempts- it still waits the right story-teller.