If Dilip Chitre's Ghost Reaches Out, We will put Him in Jail!

On my Facebook account, there are 34 requests from Dilip Chitre unattended by me because I didn't much use FB when he was alive.

Now, I neither feel like ignoring them nor accepting them.

His facebook page now has become a kind of his samadhi (समाधी) / memorial. People paying their last respects, leaving flowers, singing a song, missing him...

JENNA WORTHAM writes about the kind of awkward issues Facebook is facing when a member dies: "As Facebook Users Die, Ghosts Reach Out" (NYT, July 18 2010).

I only wish Chitre's ghost did not reach out here in Pune anytime soon because there are some people in his native Maharashtra, in his Tukaram's Maharashtra, who want him to be arrested! (Read a related post here.)

Look at following picture: There a jailer is ordering the ghost of a former inmate to leave because he had already paid his debt to the society by serving his jail term.

And here we want to arrest a world-class artist, after his death, an artist who paid far more than his due debt- if there is such a thing- to the Indian society during his lifetime. 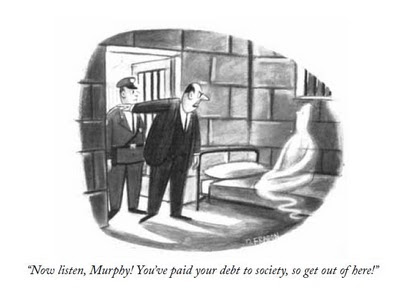 I think these people who want Chitre to get arrested should watch the new movie "Inception" :)