Susan Sontag on the iconoclastic spirit of the 1960's: "...How one wishes that some of its boldness, its optimism, its disdain for commerce had survived……”

They must be kidding when they say Ravi Baswani at death was 64. When did he turn even 40?

I have given up any hope of seeing another Hindi film as good as Jaane Bhi Do Yaaro (JBDY), 1983 where he was one of the main reasons to make it so good.

It's a pity that I saw so little of him on Hindi silver screen.

In 1980's, for me, it was much easier to identify with him rather than with Naseeruddin Shah or Farooq Sheikh who romanced pretty girls on screen while he on screen and I in real life weren't.

David Remnick recently said: If God had a plan, God was a fantastic comedian. There's a scene in The Human Stain by Philip Roth where Nathan Zuckerman is listening to an orchestra rehearse. People are having a good time and all he can think of is that, in 40 years, every single one of them will be dead.

JBDY is an orchestra. Sure, every single one of them will be dead. But I would dread to think that it would start with Mr. Baswani in 2010.

(after I published this post, I realised Bhakti Barve too was dead but then for me Ms. Barve- a good actor herself- didn't belong to the core of JBDY.) 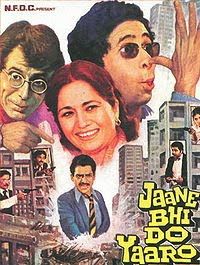 I did not even know that Ravi Baswani passed away. Thanks for the write up. I will miss him for his role in Chashme Baduur for sure. Now that we are in an era of item songs with Eastern European girls dancing in chorus...I miss the 80's.

Jaane bhi do yaaron is my all time favourite film. Ravi Baswani was fantastic in the movie. Despite his un-hero like qualities, he made such an impression even in small roles. I still remember a very small ad he had appeared for m-seal where a pipe bursts. His expression in that ad will always be with me.

Thanks Chetan and anon.

I simply loved him.