Did Shri GuruCharitra give them Alternate Miracle, Mystery and Authority?

I have never read it because I was told that it contained a lot of 'reactionary nonsense'.

Currently, I am planning to read it in not-so-distant future.

What is the importance of the book, if any, and why did it do so well?

Pagdi argues the book helped preserve and revive the Hindu religion and the culture.

According to Pagdi, the most important message of the book was:

when you decide to serve your Guru, you needn't serve any one else, you needn't even be loyal to your ruler, who were happened to be mostly Muslims.

This caught my attention.

Why do most of the people need an authority to be loyal to? Why do they need miracle and mystery to put their faith into?

"...The Grand Inquisitor tells Jesus that humanity is too weak to bear the gift of freedom. It does not seek freedom but bread – not the divine bread promised by Jesus, but ordinary earthly bread. People will worship whomever gives them bread, for they need their rulers to be gods. The Grand Inquisitor tells Jesus that his teaching has been amended to deal with humanity as it really is: ‘We have corrected Thy work and have founded it on miracle, mystery and authority. And men rejoiced that they were again led like sheep, and that the terrible gift that brought them such suffering was, at last, lifted from their hearts.’

...D H Lawrence: Surely it is true. Today, man gets his sense of the miraculous from science and machinery, radio, airplanes, vast ships, zeppelins, poison gas, artificial silk: these things nourish man’s sense of the miraculous as magic did in the past.... Dostoevsky’s diagnosis of human nature is simple and unanswerable. We have to submit, and agree that men are like that.

Lawrence was right. Today, for the mass of humanity, science and technology embody ‘miracle, mystery and authority’. Science promises that the most ancient human fantasies will at last be realised. Sickness and ageing will be abolished; scarcity and poverty will be no more; the species will become immortal. Like Christianity in the past, the modern cult of science lives on the hope of miracles. But to think that science can transform the human lot is to believe in magic. Time retorts to the illusions of humanism with the reality: frail, deranged, undelivered humanity. Even as it enables poverty to be diminished and sickness to be alleviated, science will be used to refine tyranny and perfect the art of war.

The truth that Dostoevsky puts in the mouth of the Grand Inquisitor it that humankind has never sought freedom, and never will. The secular religions of modern times tell us that humans yearn to be free; and it is true that they find restraint of any kind irksome. Yet it is rare mat individuals value their freedom more than the comfort that comes with servility, and rarer still for whole peoples to do so. As Joseph dc Maistre commented on Rousseau’s dictum that men are born free but are everywhere in chains: to think that, because a few people sometimes seek freedom, all human beings want it is like thinking that, because there are flying fish, it is in the nature of fish to fly..." (Straw Dogs: Thoughts on Humans and Other Animals, 2003)

Shri GuruCharitra perhaps gave our ancestors alternate 'miracle, mystery and authority' to that given by their Muslim rulers.

Was it for the better or the worse?

Today science and technology have given us alternate 'miracle, mystery and authority'.

Is it for the better or the worse? 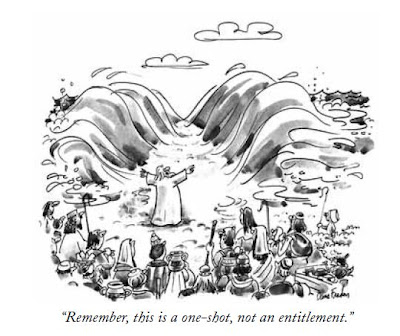 I used to read Gurucharitra seven days in my semester holidays, esp. when the exams were tough. Now no exams so no reading. My father reads it though.

What Sethu madhavrao Pagdi wrote looks credible. The regions in Gurucharitra are mostly Mogal dominated. There are many stories of Yawan Raja and poor Brahmins serving him.

But religion is a chain the traders like to tie us to. Now the ruler is marker capitalism and consumerism the new religion. How do we fight it? Rather how do we realize we need to fight?

I liked your disarming: Now no exams so no reading.

Who can argure with that?

Frankly, I have no asnwers to most questions by intelligent young people like you.

And hence I resort to cartoons and humour. That is my only hope...