Just Get yourself a Smart Belly-Dancer

"The truth is, women haven’t come nearly as far as we would have predicted 25 years ago. Somewhere along the line, especially in recent years, progress for women has stalled. And attitudes have taken a giant leap backward…
… The conversation online about women, as about so many other topics, degenerated from silly and snarky to just plain ugly — and it seeped into the mainstream.
Recently, before a TV appearance, I did an Internet search on one of the interviewers so I could learn more about her — and got a full page of results about her breasts. .."

Anthony Effinger, Katherine Burton and Ian King wrote on Nov 23 2009:
"Woman Who Sank Galleon Was Beauty-Queen-Turned-Analyst Insider...Danielle Chiesi spent a lot of time in hotel ballrooms and bars during the past decade.

As an analyst at New Castle Funds LLC, a New York hedge fund firm that manages about $1 billion, she was a regular at conferences on technology stocks, where she could get face time with executives and press them on how many microprocessors and how much software they were shipping that quarter.

Chiesi wore short skirts and low-cut tops, according to people who saw her over the years. One ploy was to go barhopping with a group, and then peel someone off to talk to on the dance floor, says a person who attended conferences with her.

“It amazes me that grown, wealthy, successful, hardworking men fell for that,” Stapleton says..."

This does not amaze me because this is just history repeating!

J. B. Handelsman has said:

“Sometimes something historical gives you a better perspective. You can see the latest dumbness as just the end of a long line of dumbnesses that have been taking place for thousands of years.”

By the way, I did not know that Handelsman, my favourite cartoonist, was dead. He died on June 20, 2007.

I just loved his "Freaky Fables" that were first published by Punch magazine.

Punch became accessible to me only because of him.

Now I realise that it was not just my dumbness because CHARLES McGRATH writes in review of 'THE BEST OF PUNCH CARTOONS: 2,000 Humor Classics' Edited by Helen Walasek:

"...But Punch had for years been running on fumes, except for the cartoons, which got better, oddly, as the rest of the magazine slipped into a kind of genteel, un-funny mediocrity...")

JBH was one of those who fought against this 'mediocrity'.

Here is a JBH fable: "Ali Baba" that has the moral : 'Don't bother with accountants, Get yourself a smart Belly-dancer.' 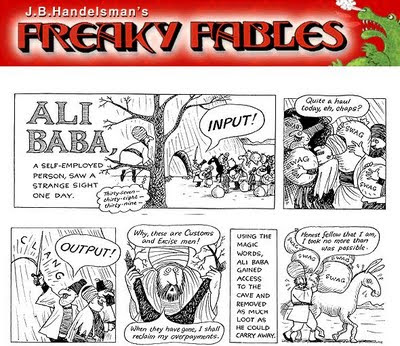 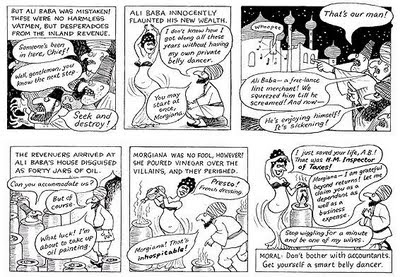 courtesy: Punch
Posted by Aniruddha G. Kulkarni at 9:00 AM

I inclination not acquiesce in on it. I assume nice post. Specially the appellation attracted me to review the whole story.