100 Years After Pandit A M T Jackson, a good Topivalla

December 21, 2009 is the 100th anniversary of the assassination of the collector of Nashik, A M T Jackson, of the Indian Civil Service, by Anant Kanhere (अनंत कान्हेरे), using a revolver sent by V D Savarkar (वि दा सावरकर) from England, at Vijayanand theatre where he had gone to watch famous Marathi play Sangeet Sharada (संगीत शारदा) by G B Deval (गो. ब. देवल). Jackson was first shot in the back and then in the front. He died on the spot.

I have yet to read a detailed history of that episode.

There I learnt Jackson was shot just before the play started, Bal Gandharva (बालगंधर्व) and Nanasaheb Joglekar (नानासाहेब जोगळेकर) were actors in it.

I have not read the feelings of Bal Gandharva or Nanasaheb Joglekar about this horrific incident. Or the reaction of the paying public. I wonder if they got their ticket money back if the performance was cancelled! And even if they did, I am sure, many must be deeply disappointed that, thanks to Kanhere, they missed the show. I would have been for sure.

Kanhere and his two colleagues paid twelve annas each for the ticket.

Book also says that Rajarshi Shahu Maharaj (राजर्षी शाहू महाराज), ruler of Kolhapur, had warned the British government in 1906 about the possibility of extreme violence because of the views of Brahmins from the districts of Kolhapur, Belgao, Nashik and Pune.

But Phadke's book doesn't have much information on the scholarship or life of Jackson.

Following is the account of the case that is available on the website of Bombay High Court:

"...Unlike other English district officers, he (Jackson) was sympathetic towards Indian aspirations, was a student of Sanskrit, and generally was popular as a man of learning and culture.

It was his interest in Indian history and culture, which induced him to attend the performance of a Marathi drama at Nasik. During an interval in the performance, a young Brahmin student of Aurangabad, named Anant Kanhere, stepped forward, drew out a pistol and shot Mr. Jackson through the heart at point blank range.

The murder created a great deal of sensation in Nasik, Poona and Bombay; and it even created consternation in the ranks of Indian Nationalists, because of Jackson's reputation as a very sympathetic and popular district officer.

Many Indians could not understand why such a good man ("good Topivalla ", as such Englishmen were called in those days) was singled out for such a dastardly murder. But it seems that there was a school of extremists at the time, who believed perversely that, these "good Topivallas" were really more dangerous than officers of the type of Dyer and O'Dwyer, for instance; for, it is the good popular government officials who reconcile Indians to foreign rule..."

Don't be appalled by this pervert logic. A lot more nonsense goes around in India of hundred years later.

The journal of the Anthropological Society of Bombay‎ wrote: "The Society records its deep sense of grief for death of one of its most learned members,AMT Jackson, ICS."

"In an interesting essay in the Empire Review for September 1907, Mr. A M T Jackson has shown how the traditional Hindu Kingship- the political ideal which the genius of warrior Sivaji sought to revive and which the intriguing spirit of Brahman Peshwas effectually shattered..." (from 'The people of India' By Herbert Risley, William Crooke)

Was it just a coincidence that he was killed by a Brahmin?

Bimanbehari Majumdar: "...Jackson was a learned Indologist. He contributed many interesting papers on Indian history and culture and was popularly known as Pandit Jackson..." (Militant nationalism in India and its socio-religious background, 1897-1917)

(Savarkar of 1909 and M A Jinnah of later years would have agreed with Jackson's views on lack of assimilation of Muslims. It also shows how Europeans had now transcended 'White Mughals' phase. It was the phase, documented most notably by William Dalrymple, in which they tried to assimilate.)

On Google Books I found following books by A M T Jackson:

Folklore notes from Gujarat and the Konkan‎

I remember to have read Durga Bhagwat (दुर्गा भागवत) writing that the chase of Jackson's valuable library was entrusted to the Royal Asiatic Society, Mumbai.

In Frontline dated Sep. 12-25, 2009, A.R. VENKATACHALAPATHY has written about the assassination of Robert William Escourt Ashe on June 17, 1911.

I was most moved by this family photo of Ashe's. 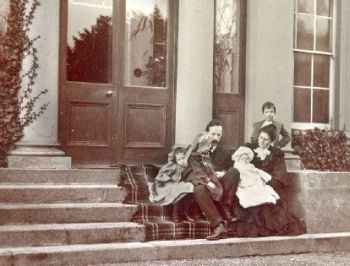 PICTURE FROM THE ASHE FAMILY ALBUM/

COURTESY ROBERT ASHE and Frontline
Posted by Aniruddha G. Kulkarni at 9:00 AM

It is a nice write-up. But there is no full account. What happened to khahere after that event?.was he teied and sentenced? did he put any defence if so what was it? This brahminical brave did not have a place in the history and not known as much as the case of Ash. The shooter of Ash also a Tamil Brahmin

Kanhere was tried and hanged with two others in April 2010.

I don't know if he was brave or coward.

Kanhere is very 'famous' among the Indians I know.

In fact, I didn't know a thing about Ash and his killer before Frontline article.