Indian Men: The Bliss of Losing the Self

Disclaimer- I very much belong to this species.

V S Naipaul: “The outer world matters only in so far as it affects the inner. It is the Indian way of experiencing…”

Sudhir Kakar: “We Indians use the outside reality to preserve the continuity of the self amidst an ever changing flux of outer events and things. Men do not, therefore, actively explore the world; rather, they are defined by it. It is this negative way of perceiving that goes with ‘meditation’, the striving after the infinite, the bliss of losing the self; it also goes with karma and the complex organization of Indian life.” 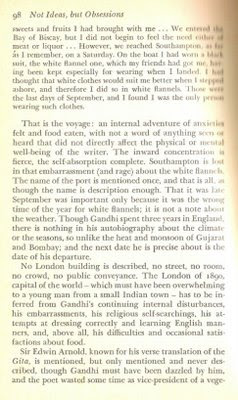 (Double click on the picture to get a larger view) 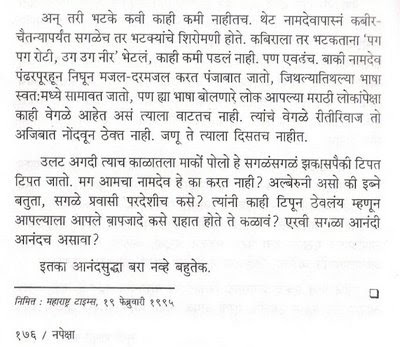 (Namdev however was not self-effacing at probably the most important event in his life: Sant Dnyāneshwar ज्ञानेश्वर taking to salvation (Samadhi) in 1296 CE. It's only because of him we know so much about it.)

‘Prabodhankar’ Thackeray on our habit of not documenting, contrasting it strongly with the British habit, practised by men like James Grant Duff: 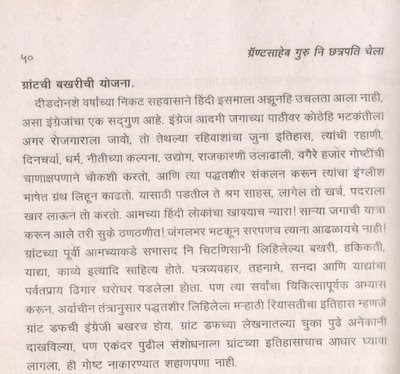 Nothing surprises me since I learnt this:

SN 1054 (Crab Supernova) was a supernova that was widely seen on earth in the year 1054. It was recorded by Chinese and Arab astronomers as being bright enough to see in daylight for 23 days and was visible in the night sky for 653 days, outshining the most brilliant stars in the heavens.

Dr. Jayant Narlikar in his book “The Scientific Edge” (Penguin Books India 2003) has a chapter titled “The Search for records of the Sighting of the Crab Supernova”. It describes Herculean efforts put in by his team to locate any record of this grand celestial event in Indian historical records, including popular literature. Sadly, they failed.
Posted by Aniruddha G. Kulkarni at 9:00 AM

Good one, reminded me of a similar excerpt in Antarnaad some time back (probably by Shivajirav bhosale), lamenting the lack of documentation and contrasting it with a travelogue of a British traveler who traveled by Road from Madras to Calcutta before the arrival of East India company.